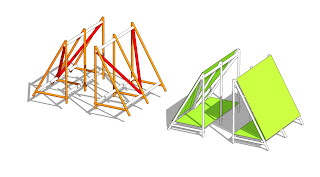 I had the good fortune to meet up with a chap Toby Clark from the John Muir Trust Awards who was interested in the wild huts concept and was keen to give it a try. The accessibility of the project initially grabbed his attention and how people could engage with wild spaces in urban areas as well as rural. We agreed to build a '2 person shelter' one month prior but had failed to anticipate the onslaught of freezing weather conditions. It felt like madness but we gave it a bash.

It was on a dark cold winter’s evening after work when we met in a west-end bar to discuss our build and where we might go. The ruined remains of Partick Central Station are sited just behind the bar and this seemed as good a place as any! Toby heartily agreed but suggested that after experiencing the freezing temperatures that day he was ‘anticipating’ the experience rather than looking forward to it.

The station was built in the 1890s by the Lanarkshire and Dunbartonshire Railway Company, it sat on a line that ran along the north bank of the River Clyde from Stobcross to Dumbarton. The station was renamed Kelvin Hall in 1959. 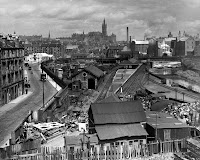 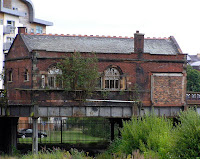 Passenger and goods services to the station ceased in 1964 when it closed as part of the Beeching cuts to rail services across the . The station building was later used as a workshop and an auction house before lying empty for a number of years. The remains of the platforms and track-bed, which were underneath the station building, have been removed but the railway's route is fairly discernible. The station's goods yard served as a site for travelling people and as a scrap merchants.

The site had been empty and awaiting redevelopment when in 2004 it emerged that the supermarket chain Tesco wished to develop a 24-hour operation there, in the face of local opposition STOP. Tesco had the station building demolished on 28 January 2007, before planning permission had been given for the development from Glasgow City Council.

We ventured out into the frozen air and passed through an open gap in the fence which led along the old railway tracks. We spend a short while exploring this forgotten landscape and regaining our bearings. It was like an island: marooned on 4 sides by high walls, roads, bridges and the River Kelvin. It was strange to find such a pocket of overgrown wildness so close to the busy west end and ’s bustling .

The Build:
The hut concept was two free-standing mono-pitched structures which were mirrored and could be bound together for increased rigidity if needed. As the freezing rain steadily fell we gathered the fallen branches which lay strewn throughout the dense thickets. Due to limited tools - Toby accumulated the better structural timbers as I wrestled with bundles of tangled branches. We stacked our materials under the sheltering road bridge and assembled a series of A-frames which we used as the primary structural components.
This was a fairly time consuming process but we had the basic structures complete and in place by around 11pm. After the rain had passed, the stars and moon burst through the shifting clouds and the temperature began to plummet much like our energy levels. 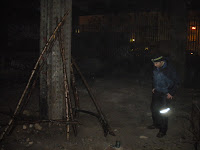 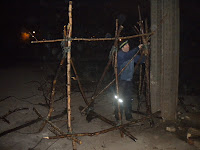 We decided to take a break and stop for a well earned beer. To my infinite joy I had somehow managed to burst open a can in my rucksack which drenched all my spare clothes with freezing cold Stella . It was probably a better smell than mud and sweat, but would increase the chance of hypothermia if worn! I offered some soggy spare socks to Toby but he gracefully declined in favour of his life. 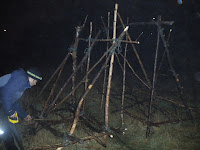 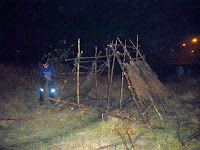 The hardest part of the build was yet to come as this involved gathering bails of cut material to use as roofing tiles. I knew from experience that this would be time consuming and Toby wasn’t entirely looking forward to the process. It was around 2 hours later where he confessed that bailing wasn’t for him. Gathering grass for hours on end on a freezing cold winter’s night is numbingly monotonous and requires a steely mindset.

I hadn’t seen Toby in a while and decided to take that opportunity to stretch my legs and see how he was doing. Through the mist I noticed Toby had a new friend in the form of an inquisitive fox! It seemed to take an interest in what we were doing and was happy to come close in search for scraps. It darted around playfully and watched our progress for the next hour. 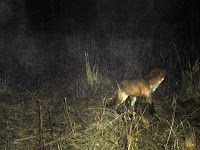 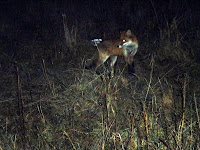 A cormorant flew overhead, heading upstream. It occurred to me that these spaces have a role in providing sanctuary for life of all kinds. It would be good to recognise the importance of these informal spaces: they seem to have a more exceptional capacity to harbour wildlife than our manicured parks. 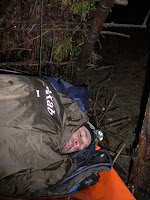 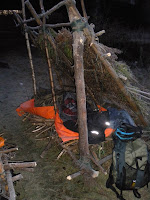 Around 3am we were ready to try out the structures and unfurled our sleeping bags over the frosty branches. Passers-by glanced down from the adjacent bridge on occasion but we remained undisturbed. Toby noticed that the frozen forest glistened like the stars and it was difficult to differentiate between them. We slept until around 7:30am where we both woke with cold feet. I looked down to see my sleeping bag had a glaze of frost which covered my projecting feet. 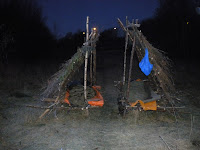 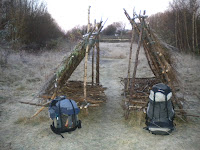 By 8am the blue morning light had saturated the sky as the city streets sprung to life once again. We passed through the fence and looked down at the hut from the adjacent road bridge. It stood like the mystical jungle shelter from a lost tribe. After mild reflection we soon saw sense and headed straight to the nearest café for a fried Scottish breakfast. 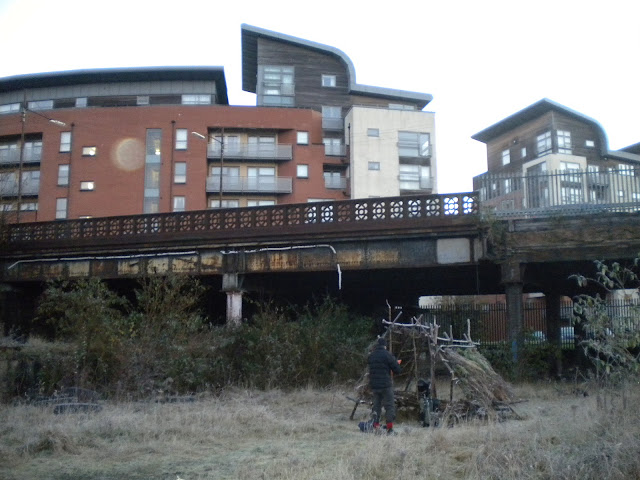 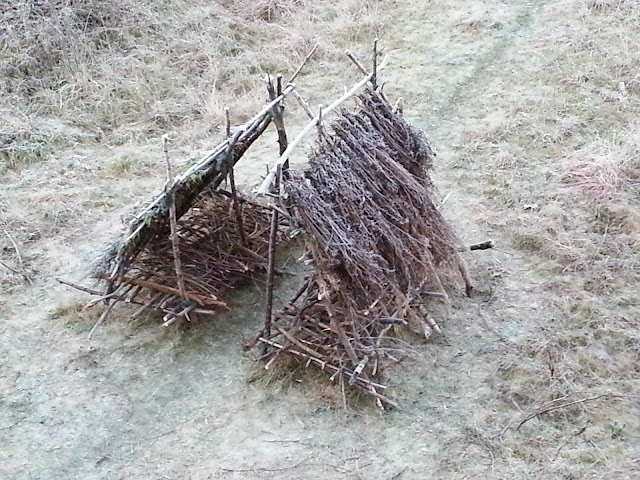