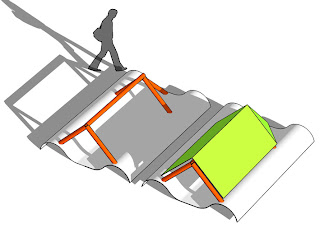 ﻿
I was visiting family in Peterhead in the north-east of Scotland for New Year and decided to embark on another wild hut adventure. The coastal area to the north of Peterhead is patrolled by armed-guards 24 hours a day. They patrol the tracks and fringe-roads surrounding St Fergus Gas Terminal which provides 20% of the UK’s Gas requirements (and looks like a futuristic city).

I was dropped-off in the darkness along a single track road which leads to a solitary lighthouse at Rattray Head, one of the only places to access the beach past the secure perimeter of the giant gas plant. En-route we passed armed police at the shop, in various lay-bys and spinning along the tracks and by-ways. They obviously anticipate the colossal disruption and loss of revenue that a potential terrorist attack would create…even if the terrorists can’t see it. If I may make a flippant statement at this point…it’s far too windy at St Fergus for terrorism – they would be blown onto their bum as soon as they stepped out of their vehicle! I think the best way to ‘take out’ the gas plant would be to steal everyone’s jackets… 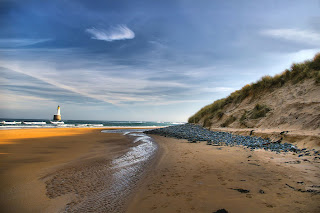 I wandered along a flooded trail to an exposed beach which was vast and windswept. There was a Long Tailed Duck pottering about in a sand-pool and a Desert Wheatear harbouring in the dunes above (which is apparently a rarity in bird-watching circles). Recent storms had devastated many homes in the area and wiped out a good number of seabirds. The beach was littered with the carcases of these smashed-up unfortunates.

﻿
I retreated into the shelter of the dunes as to avoid the high tide. I dug a body-sized ditch in the sand which would form the main sleeping compartment and keep me out of the wind. In the process I also uncovered a family of transparent flies and grubs which must have been wintering deep in the sand. They jumped around the trench like a blur of sandy grass-hoppers. Not ideal sleeping conditions.

﻿
After an hour of beach-combing I had managed to find only 5 small sections of driftwood which would allow me to build the basic roof structure. Rather than a jelly-like carpet of seaweed which I’m used to – the beach had a supply of kelp branches: thick tendrils which bind the kelp forest to the sea-bed. They were about 6 feet in length and about as thick as your wrist. There was enough for the roof which was all I needed.

I gathered great bundles of these kelp stalks and carried them over the next few hours high into the dunes. I arranged them along the roof and buried the structure in sand. On completion I sat for a while on top of the dunes - looking south towards the giant gas plant. During the day the terminal looks like a standard bunch of pipes and electrical mess (a technical term), but at night it looks like a bright futuristic city. The lights of Peterhead can also been seen a few miles further to the south which contrastingly looks slightly more 60’s and a lot less futuristic.

Roughing it:
This particular overnight experience was a lesson on how to cope with beasties. I crawled into the hut for a look and was confronted with heaps of skipping flies and bugs. I scooped out handfuls and tossed them up into the wind for a pleasant journey elsewhere. But there were just too many.

I decided the best way to get rid of them was just to get into my sleeping bag and not look at them! As soon as I lay down to sleep most of them crawled under my sleeping bag to safety. Out of sight – out of mind, I turned off my head-torch and lay down. As my eyes grew accustomed to the light I noticed them all around my head trying to climb to safety or burrow into the sand. I pulled the flaps of my hat around my ears…just in case and dozed off.
The moon spun round from the east to the south-west until it was time to gather my gear and make my way back along the track. The wind had blown a cup-full of sand into my clothing and pants which had the effect of a ‘spa-quality’ exfoliation. This empty and windswept beach was actually full of life and I had the good fortune to sleep with most of them. 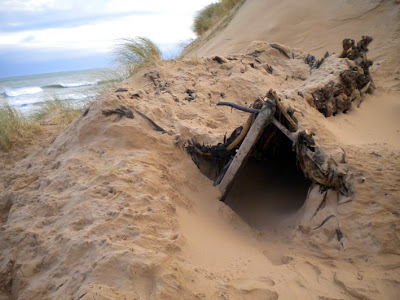