Location: Glasgow, Scotland
The site I had picked was fairly close to home on some overgrown redundant land just north of Festival Park in Glasgow’s south side (adjacent to the BBC Headquarters). 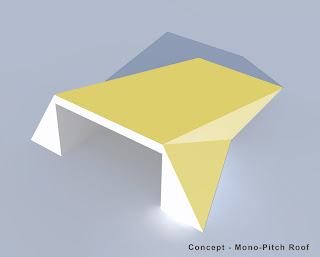 Recent wind had brought down a good supply of branches which I thought could be used to build a structural frame. Another thing I noticed was that a vast reed-bed grew along the length of a wide shallow ditch. The reeds were usefully about waist height and dry like straw. I decided to position the hut as close as possible to the forest edge and this reed-bed in order to minimise the accumulative distance of repeat foraging. I found a small clearing between the ditch and the forest which looked fairly well drained and far enough from the forest edge to be clear from any further falling branches.

For this first ‘trial run’ I decided to bring with me a small ball of biodegradable garden twine. I used this to lash together a fairly simple mono-pitched structural frame. I laddered the roof with small cross members, which gave the frame some rigidity and supplied fixing points for the roofing material. 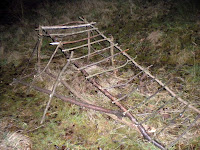 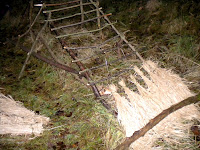 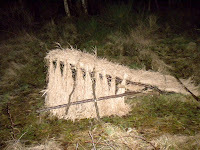 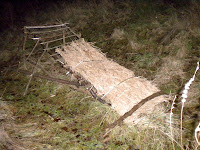 I then cut numerous handfuls of reeds, binding them at one end in order to use the mini-bails like roofing tiles. These where then lain out in horizontal bands, starting from the base of the structure to create overlapping tiles. Long and flexible twigs were then used to tether the reeds down onto the frame. More reed-bails were used at the side to form a make-shift wind break.

In all honesty this was a slow going process. It took me 2 hours to build the structural frame, 2 further hours to tile the roof in a thatch-like fashion and a further hour to insert the wind-break wall and finish it all off.


(Instead of tying every bundle of reeds together, in the future it might be quicker to simply trap them between some branches, possibly just held in place by gravity. Messing around with thin twine on a dark windy night is very fiddly (especially if you have sausage fingers like me) and made worse by increasingly cold hands. It’s a time consuming process to bind everything together, although finding timber and cutting reeds seemed relatively quick work. As my hands and legs can now contest, thorny brambles are fairly invisible in the dark undergrowth.) 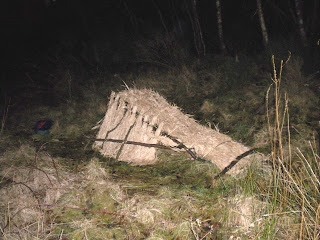 Roughing it:
I felt fairly uneasy stumbling around a forest at night. It seemed completely lifeless, other than some magpies which screeched high in the trees as I fought my way through fairly thick undergrowth. A police helicopter repeatedly flew past, shining its search light in all directions. When I was finally bathed in a white light, I was surprised to find it was instead the moon, which had temporarily made an appearance in the east, between fast moving clouds. The weather forecast said it would rain during the night between midnight and 4am so I was looking forward to that as you might imagine.
Groups of drunken teenagers wondered past every hour or so, but I felt fairly hidden in the undergrowth some 100m away, almost like a nocturnal animal shunning human contact. 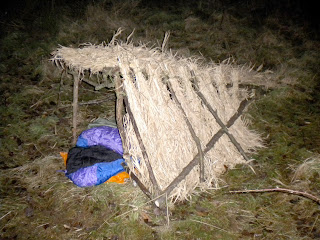 I was fairly tired by the time I rolled out my sleeping bag and lay down in the shelter for the first time. It was about midnight and I was sure the rain would start at any moment. It felt strangely apt yet surreal that I was lying down in some forgotten overgrown wasteland in the shadow of the new iconic ‘spaceship-architecture’ which had sprung up processionally along the Clyde front.
I had imagined this place to be an insect infested quagmire, but in the winter the place seemed devoid of life, no rodents, no insects just the occasional slug or screeching magpie. There was a tranquillity that I wasn’t expecting and I soon fell asleep staring at the clouds as they raced across the purple sky.
I woke in the night to find the roof deflecting the majority of the heavy rain. The easterly wind seemed unable to penetrate the reed thatch wall either which was a relief. I woke around 7am to the sounds of rhythmical drips falling on the sleeping bag and noticed the moon was now high in the west. The thought of going into work was strangely surreal from this perspective. Waking up in a ditch and doing a full day’s work in an office seems worlds apart. 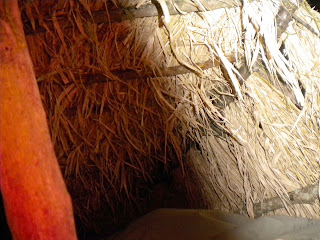 I felt pleased with how I used this time. It would have been another evening forgotten in front of the TV. The pro-active hunt for memorable experiences had begun! 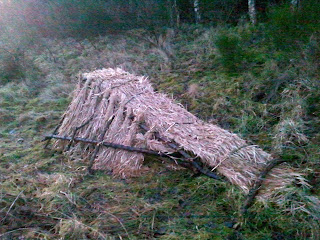