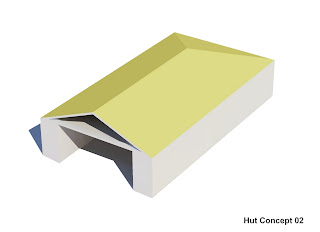 On the south bank of the River Clyde, (almost opposite the new Transport Museum by Zaha Hadid Architects) is a derelict series of vast concrete basins, a relic of Glasgow’s proud ship-building heritage. These docks are hundreds of meters in length and contain murky brown reservoirs of stagnant, soupy river. If the tens of thousands of beer cans are anything to go by – either someone was planning to build a gleaming aluminium ship from recycled metal, or this place had harboured some of Glasgow’s thirstiest alcoholics for what must have been a considerable time. 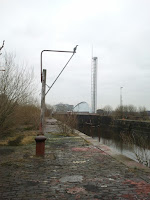 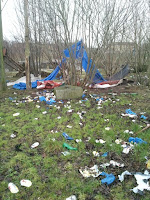 There were also tent like structures scattered throughout this overgrown dockland. They made me wonder what kind of people used this place as a makeshift home. Whoever they were, it was obvious from the junk scattered around the tents that they loved drink & drugs and weren’t too bothered about cleaning up. These areas were tarred with the worst kind of litter – a human slug-trail of lighters, tinfoil, vast bonfires and mountains of beer cans.
All this made me wonder, if anyone could show these unfortunates how to build a proper drug-den it was me!
Hut Construction:
I decided at this point that I would need to find my own part of the dock away from all the junkie’s gazebos. After following an evolved path through a thicket of dry bushes, I found a flat site on the river bank at the most westerly end of the peninsula. There were vast piles of cut stone which I quickly decided would make the perfect walling material.
As the blocks were fairly rectilinear (other than some amorphous blobs of black tar which bound many of them together), they were fairly quick to build with. I formed a coffin shape series of walls, 4 courses high and around 2m in length. This only took around half an hour to build and formed the base-walls of a basic hut structure. 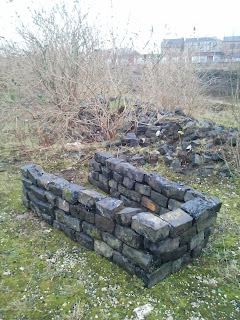 I decided I would try to find natural fallen branches and build a roof that is within the spirit of the project, rather than use the vast amounts of factory cut timber which I had noticed scattered around the docks. Due to a lack of mature trees though, it took a considerable effort to find enough branches. I kept it simple and just framed out a basic structure with the few branches I had found. 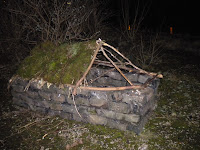 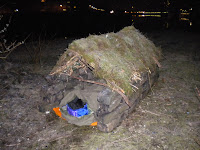 After constructing a simple pitched roof structure with a hipped-gable, I noticed that the surrounding grass was very short and the bushes were pretty bare. It quickly dawned on me that finding suitable roofing material might be a struggle. The hut at this stage was beginning to remind me of a traditional 'highland croft', and so I was suitably inspired to thatch the structure with vertical twigs which became the supporting layer under a heavy moss covering.

(This was actually a quick process and after a couple of hours the roof was complete. If it was breezy, I would have probably bound the roof structure to the base walls, but as it was a calm night the weight of the branches, twigs and moss was enough. I gave it all a quick shake and it seemed fairly sturdy and heavy.)
Roughing it:
It was around midnight when I decided to head to bed. The chorus of children’s voices screaming from the Govan tenements had stopped a few hours earlier, after a similar chorus of wailing parents had called the children home from their windows. A police helicopter hovered past on an hourly cycle. It circled the housing scheme and returned to the landing pad at the same trajectory each time, which coincidently was around 80 feet in the air directly above the shelter. I wondered if they had an infra-red heat sensor which could see me lying there on the banks of the river at -2 degrees on a Saturday night. Even if I wasn’t breaking any laws, I’m sure they could have locked me up on grounds of insanity. 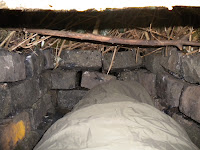 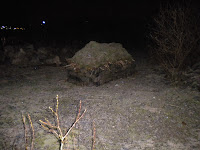 The sky was clear (other than clouds of helicopters) but the stars were diluted by the orange light pollution of the adjacent buildings. The hut’s roof and the surrounding docklands became draped in a white frosting of sparkling ice. I could feel my breath condense on the collar of my sleeping bag and drip instantly back onto my face. I pulled my hood up and moved the sleeping bag down as to avoid these ice cold drips.
It made me think that sleeping rough in the winter was less about dealing with rodents and insects and more about dealing with ice and condensation. The night was crisp, calm and silent. I fell asleep fairly quickly and slept right through until 7am. 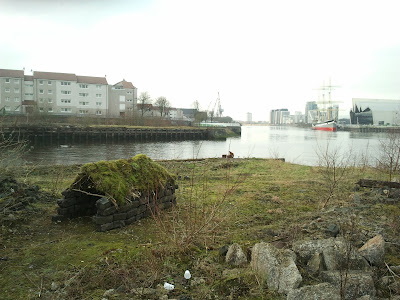 ﻿
When I finally woke, I sat for a while on the river bank, admiring Glasgow’s new riverside museum opposite. This newly built piece of spaceship architecture was inspired by the Clyde’s historic ship-building sheds, echoed through a series of modern sharp pitched roofs. For a very brief moment I felt separate from society. How can striving for less mean so much and why did I feel content lying so primitively in this wasteland? I gathered my thoughts and my sleeping bag and slipped back through the gap in the fence which I had entered.
Posted by Kev Langan at 16:31