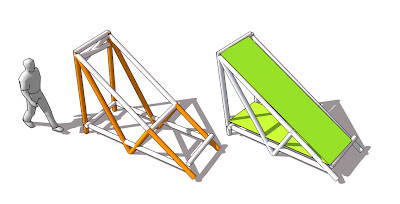 ﻿
M-frame Hut
I always thought ripping a toe nail off would be a fairly negative experience and indeed it was. I was heartily pulling on my woolly socks in a rather brisk manner when I felt the toenail catch on the inside and felt subsequent blood. I had previously bruised this toe nail during a long distance hike through the Highlands but hadn’t expected to part company with it so soon. It detached from one side and was swinging rather freely. I tried to pull it off but it was still organically deep-rooted on one side. I managed to stop the bleeding, Sellotaped the nail down onto the nail-bed and popped on my wellies. I wasn’t going to let this minor inconvenience disrupt my enjoyment of the icy-cold rain and wind waiting for me outside!

I walked through the downpour to the Media District on Glasgow’s River Clyde where there is a large expanse of overgrown wasteland yet to be developed on its south bank. After passing a stream of office workers who were leaving for the night I made my way over to the darkest corner of the quay. The only good thing about torrential rain I discovered is that it makes for fewer awkward conversations as I’m usually the only person mindless enough to be wondering around in it. As darkness fell I noticed a huge pile of pruned branches which had been discarded over the fence from the neighbouring residential development. I decided to make the hut entirely out of this rotting pile of brown leaves, twigs and cut branches. 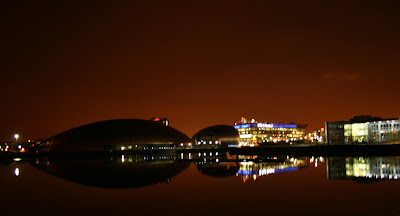 The Build:
As I was frequenting the newly branded “Media” District (home to BBC Scotland HQ, STV, rats and seagulls amongst others) I decided to build an “M” shape hut structure. I arranged some branches on the ground in two triangular forms and bound them tightly together. Within each triangle I placed further bracing which formed the “M” shape. It also gives the sleeping platform some mid-way support which is ideal as I usually fall right through the bed each time like a comedy sketch show. 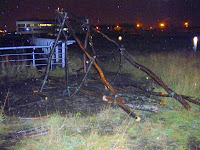 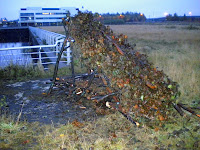 ﻿
I stripped the twigs from various branches to form cross bracing members which allowed the structure to be free-standing. I then lashed some further branches along the length of the roof like a large ladder-frame. All the discarded brown leaves and twigs were then used to tile to roof (much like a traditional debris shelter). 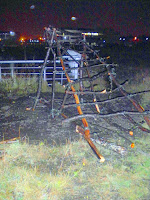 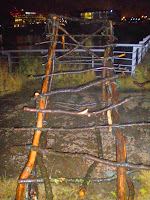 This was a particularly quick process and the roof was water-tight in around half an hour. One thing that wasn’t water tight was my wellies! The continual rain had streamed down my trousers creating vast cold reservoirs in each foot. I took them off and poured out the contents. It was a delicate business putting them back on though as the sticky-tape had become wobbly...much like my toe nail. 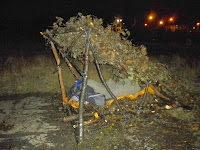 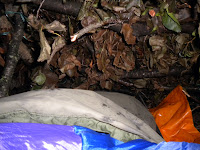 I just had the bed platform to create and set about finding springy bedding material. As I pulled hard on a branch I felt something sharp cut deep into the top of my index finger. The blood quickly mixed with the rain and ran down my hand for the next hour. The bleeding wouldn’t stop as the rain continually diluted the open wound. I started to wonder if I should start another project called “100 different ways to hurt yourself in the dark”. It might also be an slightly easier project! The hut was complete in around 3.5 hours, my quickest hut yet.

Roughing it:
I pulled my sleeping bag out and rolled it across the bed platform. It was obvious that winter would soon be on us and the summer had passed as quickly as it had arrived. It felt fairly cold although reasonable, the weather forecast suggested there would be lows of 8 degrees. I put my full weight on the sleeping platform and for the first time ever – no cracking, nothing breaking...all quiet below! The structure seemed to tighten under the weight and remained firm. I squirmed into my sleeping bag and looked out across the water as the bright lights on the BBC HQ performed a colour-changing sequence. 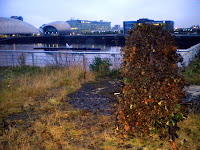 The hut’s roof material was also a minor success as the rain seemed unable to penetrate the dense canopy of dead leaf-litter. The rain stopped in the night and the temperature dropped. I watched people passing close by, and ambulances screeching past a lot more than usual. I thought it must be an strategic “arterial route” they use to-and-from the Southern General Hospital. Luckily that was my last boring thought for the evening and I fell asleep fairly quickly. I set my work alarm for half 7 and awoke to a still-calm morning. I gathered my things and made my way back through some deep puddles along the quay wall. Back home I used some “second-skin” liquid bandage for my cut finger which stung much like the original accident itself! Every time I return from a night of building huts my brain always feels refreshed, as if washed clean by the cool rain. 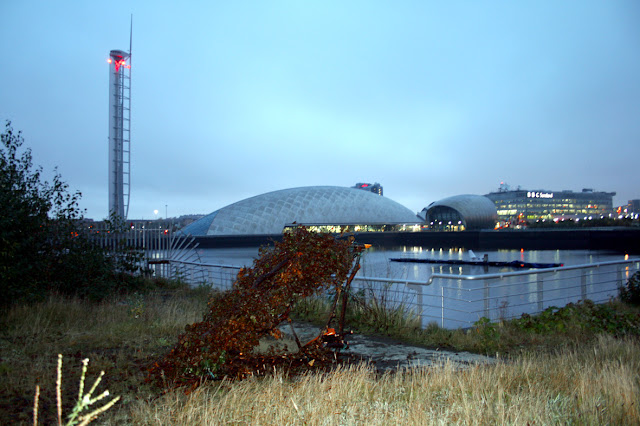