Just north of is a strange rectangular woodland which is depicted on 19th century maps as a ‘wilderness plantation’. The woods are interrupted by an ugly recycling centre and the Roman Antonine Wall passes just yards from its north boundary. Just to the south of the woods across a field, is the lost

I had managed to convince my girlfriend to come and explore these woods with the possibility of building and sleeping in a hut. She suggested she was happy to go as long as it was not a regular occurrence. She had already been out ‘hutting’ the previous weekend so I was skating on thin ice. We turned sharply off-road along the old access track to and came to halt in the sticky mud. I got out and pushed and we soon found a suitable place to park. The dense forest had a series of man-made ditches which ran their full length. This area had become a local dumping ground and we clambered past old prams, gas bottles and tyres to the forest beyond.

The Build:
Once we entered the woods it was clear that few people used them for recreation purposes. There was no sign of any well used footpaths or even any evolved muddy trails. We did find the odd beer can and a couple of broken tents although these looked more like teenage parties rather than the drug-dens of inner-city . We wandered quietly across the dense wet carpet of moss and ferns, exploring this magical pristine forest.

We managed to find lots of large structural branches fairly quickly and got to work constructing the hut frame. The basic concept is much like a 4-poster bed (only the best for my girlfriend!) with a lightweight canopy above for shower protection. 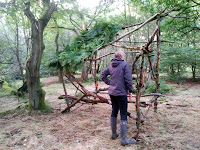 I decided that the roof could be built like modular panels and lifted into place. We built 2 simple ladder-frames and tiled them with foliage. This was fairly time consuming but created light-weight, sturdy panels which were easy to lift. The structure was shower-proof in around 3 hours. I also completed the double bed by laying out lots of horizontal branches and twigs which created a springy platform. 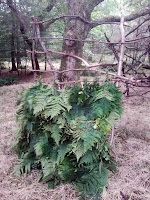 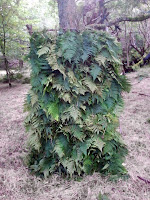 I decided to road test the structure so jauntily hopped-on and heard an almighty CRACK as the first structural timber split. I asked Kirsty to also apply her weight…and we soon found ourselves snapping the entire sleeping platform. Like many household beds there are often small ‘central-legs’ underneath which help support the mid point. I set about finding better timber and hammering support posts underneath around halfway. The bed was now fit for Pavarotti himself and we rolled out the sleeping bags and made a small fire. 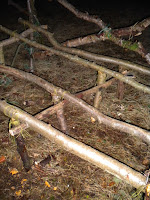 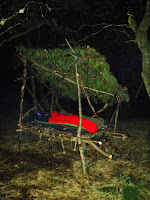 Roughing it:
The fire kept the midges at bay which were a mild irritation the whole evening. Kirsty had earlier mentioned that she had been bitten by a mosquito like creature. After stupidly explaining to her that ‘we don’t really get mosquitoes in ’ – I soon noticed one sinking its needle-like face into my arm. This is the first time I had ever seen a mosquito in let alone jousting with a family of them in the forest. I later found I had large blister-like bites all over, along with the smaller midge bites and a variety of sheep ticks clinging to exposed areas of skin. Of the 3 I still think midges are the most irritating although ticks are itchy after the event much like mosquitoes. The mosquitoes though do have the most irritating bite which can be blister-like for days after. I guess this is the effects of climate-change and something us Scots will have to get used to. 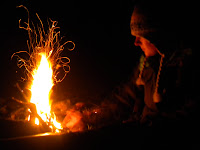 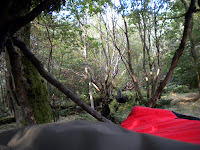 Our sleep was often broken by noisy trucks screeching past the woods or the occasional firework from a nearby housing scheme. I had expected to see deer or foxes but the woods remained eerily quiet other than a distant falling branch cracking the silence.

We woke to another cool sunny morning and left as we had arrived via the recycling plant. Kirsty remarked that she didn’t have a single tick or mosquito bite. Enviously, I suggested it’s because bugs only like clean people! She smiled as I looked down at my filthy clothing, and the scent of wet earth. 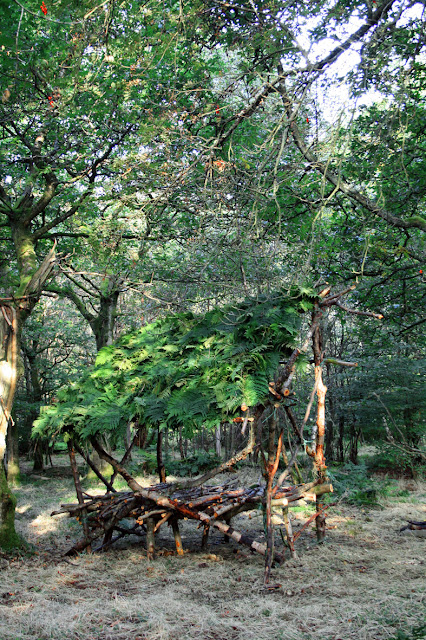