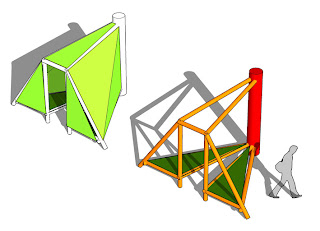 Around 12 o’clock I arrived at Mugdock Woods to the north of with a good friend Arran Brown for another crazy hutting weekend. had never slept outside and was strangely sympathetic to the notion of building a hut just for the sheer experiential impact. He is currently self-employed so these new skills may have a practical usefulness in the economic downturn. We followed some muddy trails (more commonly known as the ) until we arrived deep within the forest and surrounded by plenty foraging materials. It was a gorgeous bright winter’s day and strangely mild for the time of year. 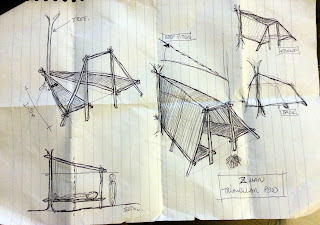 These woods skirt the satellite towns of Milngavie and Bearsden, which results in thousands of jolly walkers filtering through the damp forest from various nodal car parks and leafy boulevards. We picked a relatively quiet place for the build and were instantly confronted by a team of clambering kids who had noticed our unmanned rucksacks and obviously hadn’t noticed us. They instantly veered off in a different direction and were soon replaced by a caravan of dog walkers and their associated unruly dogs that sniffed through our rucksacks like hairy customs officers. The locals were all morbidly inquisitive and over-friendly considering its proximity to murderous and the fact I was wielding an axe.  We longed for the tranquil veil of darkness. 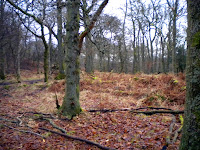 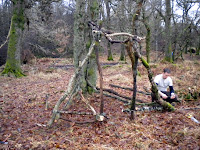 The build:
I had sat up the previous night brainstorming ideas for this two-person hut construction but hadn’t finalised the design until the next morning. I had scribbled an irregular shaped triangular pod which all tapered back to a single tree. This should allow plenty head room, fit 2 beds and be fairly enclosed. It was also light on material with only a handful of structural members required. seemed happy with the conceptual approach and we set about arranging the basic structure with some wet mossy branches and garden string. 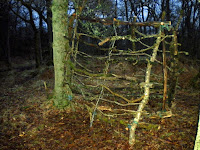 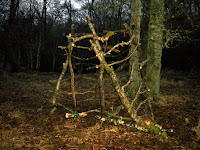 The basic frame was lashed together in only a couple of hours and we set about bailing the dried bracken for use on the walls and roof. This was time consuming in the rain but by 6pm we had covered around 3 square meters of walling each with only the roof and gable-end still to complete. We downed tools and headed to Milngavie for some food. Many beers later we somehow found the hut-site again in the blackness and set about completing the roof and side panels. 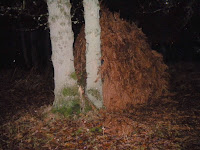 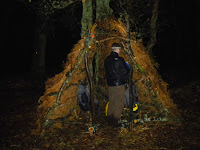 I noticed some random movement beneath the bracken and for the next hour I wondered if I might uncover a hibernating Adder. I had a friend who was bitten by an Adder fairly close to these woods when he was lifting boulders as a kid. Being elbow deep in boulders and moss in the dark is always unnerving as soon as you think about snakes…the beers didn’t help. The fact it was winter though makes a sighting completely implausible. A fear of snakes is fairly healthy though, I have a friend who is scared of cows! How is that possible? We completed the roof and soon laid sticks out for the sleeping platforms. The hut was complete by midnight and the sky cleared to reveal a cosmic array of tiny lights. 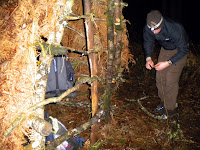 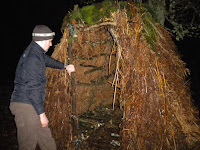 Roughing it:
We rolled our sleeping mats out and lay down. The sleeping platforms were completely rigid and the hut façade seemed fairly weather-tight. This was one of the best sleeps yet it has to be said. There was a great feeling of enclosure and the air inside the hut seemed still. We hadn’t bothered spending the extra hour required to build a front door which may have been even better. Still, the structure was roomy and fairly sheltering from the elements. 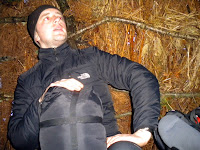 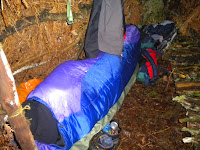 I jokingly mentioned to that we will probably be woken in the morning by a big dribbling dog peering through the doorway…and with sorry-synchronicity a giant brown gasping K9 face poured itself into the hut at 9am with sniffling intent. I explained to the dog that it should probably best leave and it reticently took my advice. 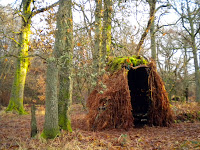 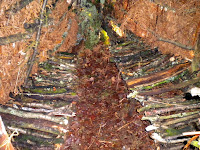 Other than ’s snoring (sorry Arran) it was a comfortable night’s sleep. We packed up our gear and swam against the tide of dog walkers and joggers back to the train. 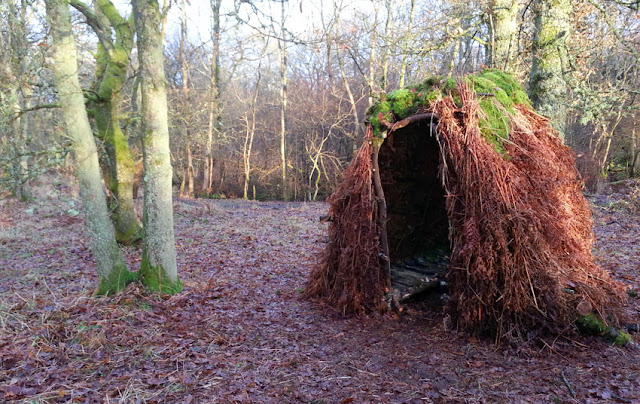