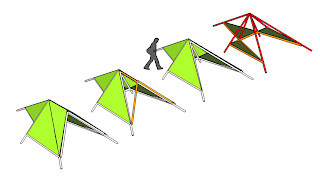 ﻿
After an early train ride to Edinburgh I met up with some old friends Richard Patterson (360PIX) and Arran Brown (3D Drawing Office) at Haymarket station. I had printed out some plans of a new 3-person hut so they could get a feel for the job in-hand. Richard laughed at my eccentric preparation and discarded the plans on the floor like used tissues (he finds it hard to engage with anything more complicated than a sausage sandwich).

We parked-up just west of Edinburgh in South Queensferry almost directly under the majestic Forth Rail Bridge. Richard proudly said it was also known as the ‘Eiffel Tower of the North’. He was right – its sheer scale is equally comparable to its Parisian cousin and uses 10 times more steel. The Eiffel Tower though has a slick elegance fit for any major European city - where as the Forth Rail Bridge feels intrinsically ‘Scottish’ in the fact that it’s ginger! 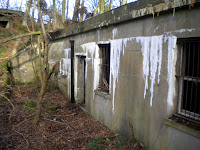 ﻿
We walked along the coastline tack eastwards through Dalmeny Estate where we arrived at the pre-world war concrete bunkers of Hound Point (1914 – 1916). The remains consist of two concrete gun emplacements with a magazine building to the rear. 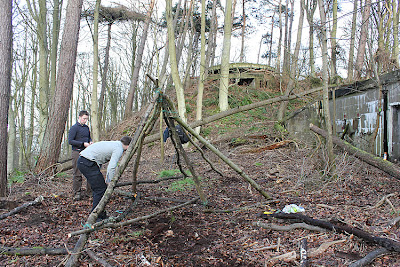 ﻿
In addition, it is possible to see traces of hut bases, and a pile of brick rubble near the gun emplacements which may possibly be that of the observation post.
The concrete bunker seemed like a great place to leave our gear as we foraged the windy hillside for materials. 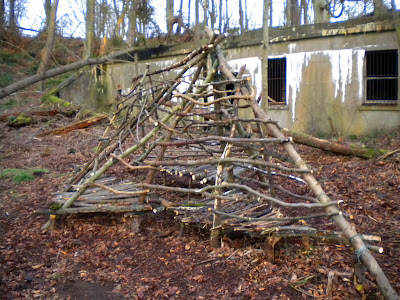 The intense smell of gas filled the forest air. I assumed either Richard or Arran had relieved some pressure after a big breakfast but it turns out that: “a marine vapour recovery unit at Hound Point collects volatile organic compounds (VOC) that would otherwise be released into the environment during ship loading, and processes the VOCs at Dalmeny for reinjection into crude oil, or for use as fuel gas.” 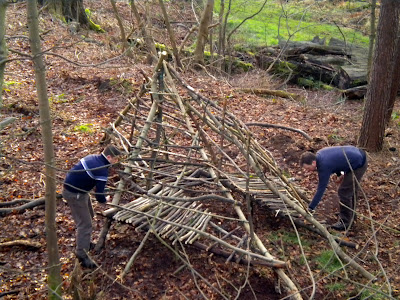 BP run a vast tanker terminal in the estuary and pipe oil to the nearby fuel depot at Dalmeny. Dalgety Bay can be seen across the water which is also radio-active! The dramatic crossings, sandy beaches and thick forests can’t really mask this industrial anarchy. The new forth crossing will add to the visual mayhem. 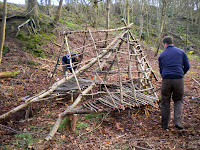 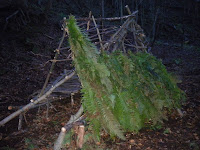 The build:
Our 3-person hut design was a rhombus, pyramidal structure with 3 internal sleeping platforms. It felt like quite an ambitious and irregular build which was conceived using architectural 3d modelling software. It was a series of triangular planes which maintained a central walkway with plenty head-room.
We scoured the forest for longer poles which would form the main structure. The forest was busy with walkers and cyclists who all stopped to stare at our foraging exploits in total bewilderment. 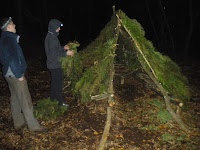 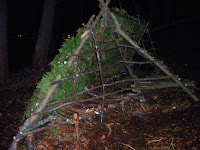 We lashed some branches together using bark and some biodegradable garden twine. Richard was continually unsure where the pieces should be lashed together. I said he should refer to the detailed 3d plan I had already given him (which I knew lay crumpled in the foot-well of his car). He was also quite keen to close off the entrance door with a wall of timber slats. I suggested he was bonkers and that an entrance to the hut would be a desirable feature!
The basic hut form was erected in only a few hours and the sleeping platforms were bound in place soon after. We drove short posts into the earth beneath each sleeping platform to shorten the unsupported spans which made these thin beams structurally sound. 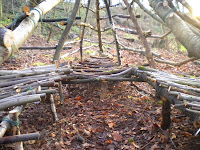 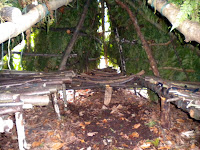 We used some spindly ferns which carpeted the forest as our roofing material. We spent an hour bundling up vast bails of the foliage which had great façade coverage. We had completed the first half of the outer façade in no time and decided to walk back to town in search of some dinner.

Richard had suffered from terrible hay fever all day (I made many jokes suggesting he shouldn’t cry about it…) His eyes were badly swollen and streaming. It was winter with no flowering plants around? The ferns seemed to release some kind of spore from their underside as we picked them although they are apparently “sneeze-free” with no pollen? 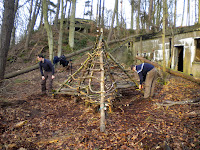 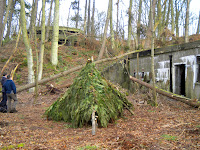 In Slavic folklore, ferns are believed to bloom once a year, during the ‘Ivan Kupala’ night. Although alleged to be exceedingly difficult to find, anyone who sees a "fern flower" is thought to be guaranteed to be happy and rich for the rest of their life. Whatever it was - the pollen count was high and Richard cried about it all day.


Roughing it:
The hut was soon complete and we built a great campfire just outside the entrance with some nearby dry wood. It was around 2am when we retired to our sleeping platforms. I was delighted with the engineering aspect of the build. From the outside it just looked like an elongated tepee, but inside it had a central walkway flanked by sleeping platforms with one cocooned bed platform at the far end. 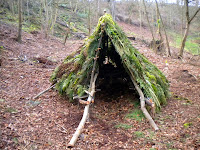 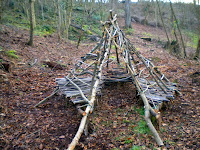 ﻿
Richard and Arran slid effortlessly sideways onto their bunks as I wriggled around like a worm trying to find the hood of the sleeping bag which was caught round some branch at my waist. I left it there for a good while as 'sleeping-bag wrestling' was never my strong point. After a while I managed to negotiate the sleeping bag into position and fell asleep with the sound of thrashing wind and industrial bleeps ringing through the trees. We woke around 10am after a warm and comfortable sleep. It was around 1 degree through the night but it could easily have been summer with the fern-façade deflecting the cold wind and rain. 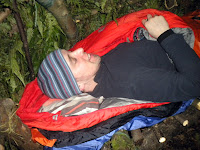 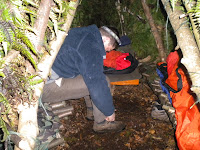 We felt satisfied in creating this angular fern-cocoon. Missing the smell of gas - we rejoined the estate track and wandered back through the forest to South Queensferry, on the hunt for an all day breakfast. We glanced back as the hut dissolved into the forest. 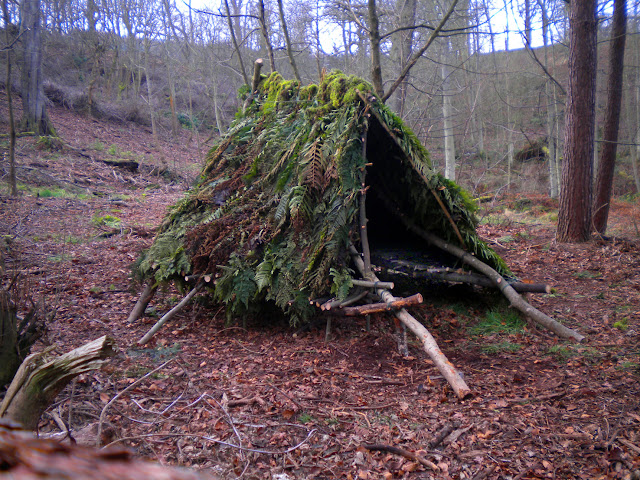 CLICK to view a 360 interactive tour of the hut construction (by 360PIX): 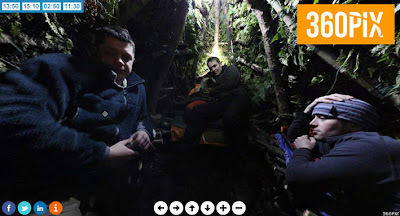 Watch a video of the hut construction: (x8 speed)
﻿