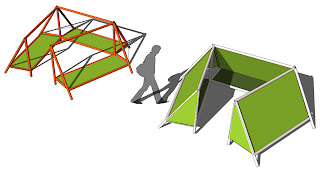 I was very fortunate to be contacted by the producer of BBC Scotland’s radio show ‘Out of Doors’ – Chris Sleight. He seemed keen to feature the 100 Wild Huts project on his show. People have often said to me that I ‘have a face for radio’ so this seemed like a great opportunity. I also somehow managed to persuade the producer to help actually build a wild hut and sleep rough for one night. He agreed to come along, although I’m not sure he initially grasped the lengthy timeframes and workloads involved.

I was keen to explore with him the craft, the architectural quality and the experiential impact of creating a shelter and sleeping rough outdoors. I had a growing concern though that I would sound, to a national audience, like a bumbling idiot or indeed just an eccentric fool! It’s probably a fair reflection though as eccentricity and I have been happy bed-fellows for some time.

We pulled the cars over in a lay-by close to Carbeth Loch on the . Carbeth is around 11 miles north of Glasgow and fairly close to the orbital towns of Milngavie and Strathblane.  Ironically, Carbeth has a history of hutting dating back to the1920’s. Around 140 self-built retreats are scattered around the loch and surrounding area which has taken on the appearance of a caravan holiday park built by beavers.

The community of huts were established as a retreat from the stifling effects of and ’s heavy industrial heritage. This is a notion I’m sympathetic to. They recently completed a community land buy-out: “The hutters would like to extend an invitation for people to come along and explore Carbeth.  In the next 2 years the hutters will need lots of support, funding, media attention and solidarity.  There are also opportunities to buy huts and sites and join the hutting movement into the future.”

I also invited a university friend Richard Patterson to help with the build as Chris would be occupied with his BBC recording duties and to our delight he even agreed to cook us dinner! My friend Richard has a company which specialises in ‘Virtual Tours’ (www.360pix.co.uk) and was interested in shooting some 360° photographs of the hut interior on it’s completion. The build was not only being recorded ‘acoustically’ for radio purposes, but also recorded ‘panoramically’ for visual purposes (I also offered to complete the full set and record the smell and taste of everything!...they weren't impressed).

We gathered our bundles of gear and ascended a steep track which led up into some mixed woodland. The elevated spot we picked for the build was fairly close to a crop of dried bracken and a tangled spaghetti of fallen branches. There seemed to be a natural ledge cut into the hillside, with a steep forested slope ascending to the east and dropping sharply away to the west. The temperature was threatening to plummet to -4 and we knew we had to keep busy in order to stay warm.

The Build:
The forest seemed to be fairly unmanaged and the volume of storm-felled timber was a pleasure. As I waffled mindlessly for the radio production, Richard flew into action and gathered most of the timber required for the entire build in less than an hour. As is the normal routine now, we bundled the timbers into ‘structural’ and ‘non structural’ piles. After some initial recording Chris and I got to work and lashed together a series of simple A-frame sections. We then laid out a number of long timbers - strategising about the sleeping platform and roof construction.

On completion of the first platform, we positioned it in a clearing between the trees. Unfortunately the sagging structure jiggled sideways like wobbly jelly. Keeping the components upright and straight is a bit like pushing custard uphill. Finally after a few more turns of the garden twine - this first part of the structure was now free standing(ish). Richard completed the 2nd mirror image component and we aligned them in position ready to bridge between with the third sleeping platform. After a few more timbers were added – the whole structure became rigid. As more wood was overlaid the joints tightened with laminating rigidity. 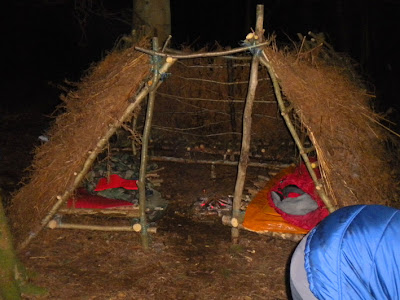 Due to limited tools Chris found all the timber for the bed platforms as Richard and I bailed the bracken tiles for the roofing. We worked efficiently as a team, pausing from time to time to partake in interviews. The bracken was icy and interwoven with shards of frozen snow which made it awkward to bail. After some outstanding sausages for dinner (thanks Chris) and many hours of tiling bracken the structure was complete and ready for road testing. 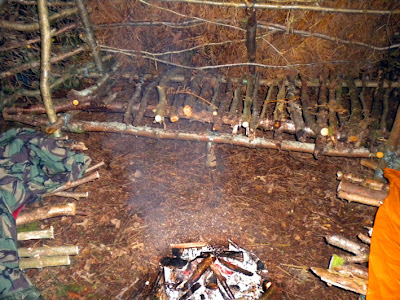 Richard had started a campfire inside the hut which had a great warming effect although also threatened to choke everyone in their sleep and sizzle holes through their sleeping bags. Being the most intelligant of the 3 – I picked the bunk directly in the line of wind-driven smoke and ash. It was indeed the warmest bunk but the smoke inhalation took the edge off my enjoyment.

Roughing it:
The fire subsided as we lay down on the beds of rolling logs at around 1am (-4 degrees). We recorded a short interview before bed and were all in agreement that this was quite a pleasing hut-structure and were satisfied with the outcome and efficiency of the build. An owl was hooting from a nearby tree, which was soon replaced with synchronised snoring from 2 nearby bunks.

An hour or two later I was awoken with the padding footsteps of a heavy animal just by the hut. It seemed to approach the hut then amble off through the undergrowth. The next morning Chris had also heard something snuffling around our bags outside. He thought it was perhaps a fox or deer, I wondered if it might have been a badger as it sounded heavy?

(Now…I mentioned the possibility of it being a badger on the radio interview and then frantically searched the internet on my return home incase badgers hibernated all winter…I didn’t want to sound both stupid and eccentric all in one 6 min radio programme.) 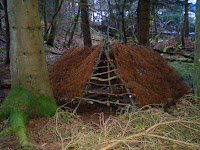 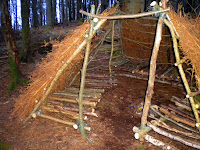 An orange haze glowed on the horizon as the sun glanced through the dark forest. We stirred in our bunks early and recorded a final section for the radio show where I blurted a few incoherent words whilst trying to sound awake. We said our goodbyes to Chris who had a busy schedule including the school run that morning and a full day's work. Richard used the welcome dawn light to take some 360 panoramic photographs and we packed our gear away.

I mentioned that it’s always astounding how many people show an interest in the simple act of building a make-shift roof and bed in a wild place. It must be an integral part of being human, a natural instinct that can only be engaged with through the act of exploring and building. Richard suggested that the radio chap had gone now and that I could stop talking rubbish! 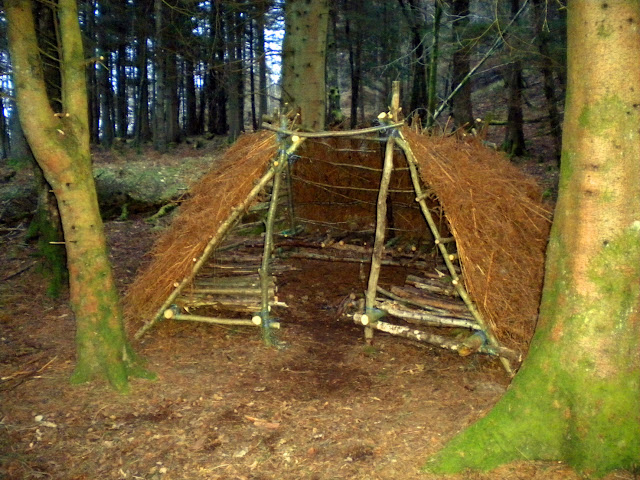 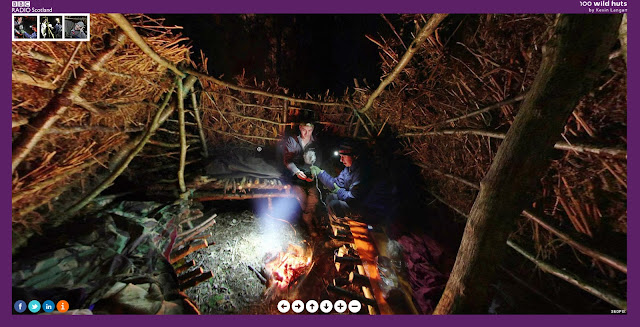