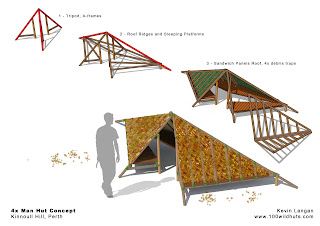 Whilst relaxing in front of the TV one evening I received a random text from a friend which read: “Al Humphreys is around Crieff on the 14th and is looking for a micro-adventure. If you’re about you should contact him through his website and build a wild hut with him! He’d love it”. I laughed off this crazy notion for a few minutes until it quickly grew substance and formed details in my mind. Alastair Humphreys is an adventurer I’ve followed for some time who has completed many inspirational expeditions across the globe. 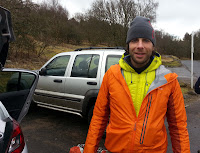 I thought it would be a bit like asking David Attenborough to come round to your house and make a documentary about your cat, it would be unlikely at best. I eventually decided to bite the bullet and contact Al - I could only embarrass myself I thought, and I was well used to that so where’s the harm!?’ I dropped him a quick email, confirmed details…and within hours it was strangely set in my diary.

Now – on a separate tangent, on the other side of the world, the famous Scottish cyclist and broadcaster Mark Beaumont was embarking on a brave ascent of ’s highest peak, Cerro San Valentin. Mark is a local lad, and was the obvious first choice for any micro-adventure in Perthshire. He initially had to decline due to his expedition commitments, but treacherous conditions and injury saw them return home one week early from the mountain. Mark was now keen to experience this strange den-building challenge and confirmed his attendance during the long-haul flights back from the .

To help record the event, I also enlisted my friend Richard Patterson (www.360pix.co.uk) who kindly offered to lend his photographic and log-chopping expertise. 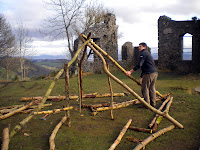 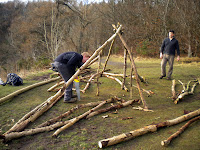 The Kinnoull Hill in is characterised by a dominating cliff-top wood and historic tower high above the bustling little city. It offers panoramic views south and east across the winding River Tay and westwards along the complicated concrete approach roads to . Looking down from the edge you can often see great bursts of black crows exploding outwards from the rock face and bouncing effortlessly around in the passing updrafts.
The folly tower dates from 1892 and was built as a romantic gesture by Lord Grey of Kinfauns. Where most people buy flowers or chocolates, Grey went slightly over-board and attempted to recreate the castles-strewn landscape of Rhineland ! 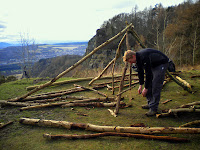 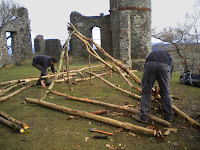 It has also been claimed that William Wallace on occasion used the cliffs below Kinnoull Hill as a refuge when pursuit became too close for comfort. No doubt the so-called Dragon’s Hole, which was a substantial cave high up among the rocks, would have been one of the places to which he could retreat. Scottish folklore also hints at the cave being home to a dragon, although I believe more likely an angry badger. 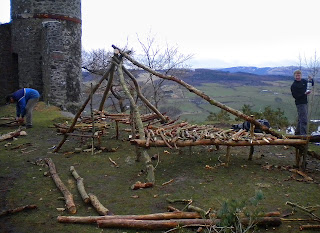 More recently 14 woodland creature carvings have appeared throughout the forest by the sculptor Pete Bowsher. Unfortunately, the cliff top summit also has a sinister reputation as a suicide hotspot. In 2002, a 31-year-old mother-of-two, pushed her two infant children off the hill's summit while they were strapped in their pushchair, before throwing herself off. It’s a strange and dangerous place with a rich mix of history and dramatic views.

The Build:
We met Al following his talk at the outdoor learning conference in Crieff and had soon found a location for our shelter in the shadow of the old cliff-top folly. We had planned to build a simple A-frame shelter which contained 4 bunks and had a roof made from 4 triangular panels. We dispersed into the surrounding woods to source some large deadwood logs for the primary timber frame. Mark had planned to join us later that day as he had only just returned from his expedition the evening prior. 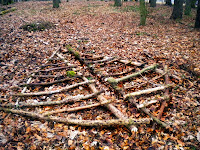 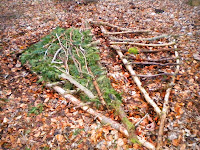 We created some small A-frames which would support 2 large ridge-poles. We then strung the sleeping platforms to the frame and the basic structure was almost complete. Mark arrived in great time after cycling from his home 12 miles away. The heavy work was about to begin, as was the biting wind and fading light. Richard began work on the fire whilst Mark and Al completed the slats on the sleeping platforms. I began to construct a triangular roofing panel which would hopefully trap forest debris between two timber grids like a giant vegetarian toasty. 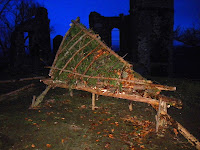 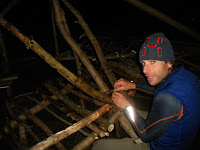 The most important part of the build was soon upon us – sausages! We ate dinner around the fire and resumed work on the roofing panels. The panels were fairly heavy and took some effort to cajole into place. By 11pm we had positioned all four of the roofing panels and decided to spend some time embellishing the bumpy sleeping platforms. We gathered armfuls of dry grass and spread it evenly across the 4 bunks which now looked surprisingly warm and comfortable. 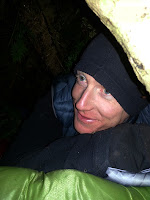 Roughing it:
In hindsight, if we had spent 5 extra minutes arranging the initial timber posts we could have made the bunks slightly wider and indeed slightly longer which would have been a great help at this late stage. Instead we spent quite some time wriggling into our bunks and squeezing our feet deep into the diminishing corners of the hut. 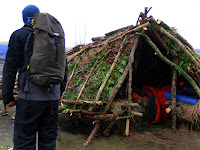 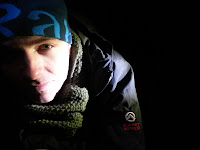 If there was one thing I knew for definite about Mark Beaumont – is that I was never going to win the battle for feet space with his cycle-strong legs. The whistling wind picked up which soon complimented our chorus of synchronised snoring.

Far below us the cars moved like a river of red light towards , turning yellow on whirlpool roundabouts. Dawn light soon filled the hut as the team woke to a cold bright morning. To the east the River Tay appeared milky-white with reflected sun light en-route to the sea. We gathered our gear and wandered back through the woods slightly tired but refreshed. 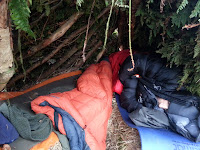 It was a pleasure to spend some time with people who are essentially challenging the boundaries and pushing the limits of human capabilities. The only thing I was challenging was the patience of the other commuters on the train home as I filled the carriage with the smell of damp earth and smoky campfires. 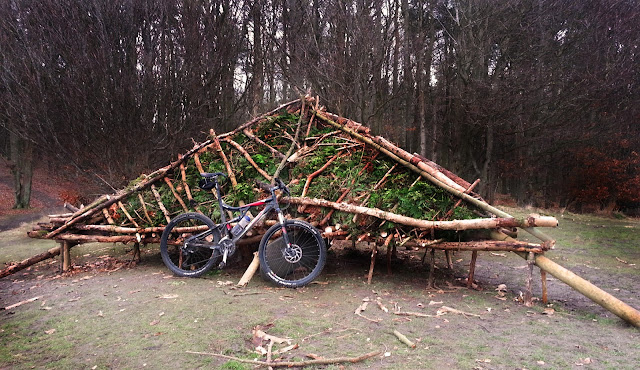 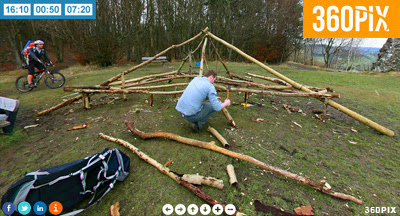