Some weeks previously I had arranged to collaborate with a Glasgow-based design consultancy called Giraffe Architecture. Raymond from Giraffe shares my passion for sustainable design and is also quite partial to an outdoor-adventure on occasion which was more than handy. After various emails we had decided to build something that would really test our design skills and explore a more ‘engineered’ solution. So in order to push ourselves we decided to build a mathematically complex geodesic dome…from wobbly twigs.

Having in the past made various shelters that were either too narrow or too short, I was worried that this more precise geometric puzzle would be impossible to achieve on a cold, dark evening with some rickety branches. It didn’t help that some of the worst snow storms this year had hit on the very day of the build. It doesn’t surprise me. 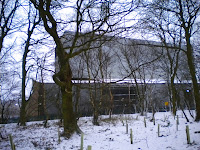 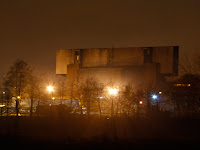 Travelling through the west end of we arrived at the gates of Dawsholm Waste Transfer and Recycling Facility (or ‘the dump’ for short) in the early evening. The recycling plant has a surreal high-rise metal shed on the fringe of a small woodland park. This hilltop forest offers great views south over ’s west-end but is fairly exposed to the bitter east-wind and blustery snow showers which now fell. 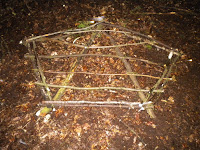 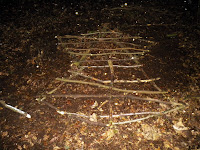 The Build:
We gathered some sticks and walked along the long approach path leading to the woods. Dog-walkers were out in force utilising what was left of the diminishing daylight. From a distance we may have looked like park rangers clearing up the fallen branches from the path. This was hopeful at best. It was more likely they noticed the serious conviction written across our faces suggesting that we were working towards something bigger, more epic, but ultimately less useful than path-clearing. We walked past with our heads down, avoiding awkward questions and eye contact. 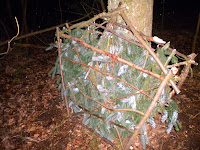 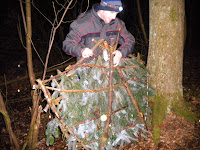 Tall trees had been knocked down by the wind in an elemental game of woodland dominos. Tipped trunks were precariously resting against adjacent trees, interlocked at high level. Many trees lay motionless on the forest floor, revealing a tiny pond below their upturned roods. We stashed our rucksacks deep in the branches of a fallen conifer tree and proceeded to find yet more sticks. 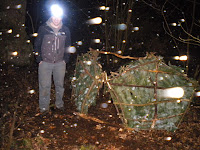 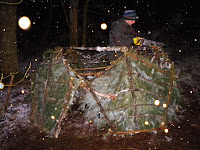 Eventually, we had gathered enough sticks for the main pentagonal components and decided to take a quick break for a cold dinner. Ray lifted his sandwich to find a mouse had nibbled a hole in the corner of the packet. Slightly concerned I hung our main food bag from a branch but was ultimately pleased to find these tiny creatures harbouring in the security of this fallen forest giant.

We got back to work arranging the pentagons which would form the basis for the hut. We required 5 large identical pentagons for this build. The pentagons were made from an inner and outer frame, inside which we trapped some fir branches from the adjacent fallen tree. They took around 45 mins each to assemble and we had the feeling that this adventure might be a late one. 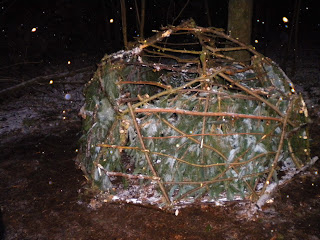 I nipped back over to the food bag when a little golden mouse (possibly a wood or harvest mouse) sprung out the bag and disappeared along the branches. I almost jumped out of my freezing skin and was of the opinion I could probably outrun Raymond if the mouse decided to attack. It was actually great to see a little woodland creature so close-up, right in the heart of the city. They are also slightly cuter than the usual fat rats I encounter on the pavements outside shops. 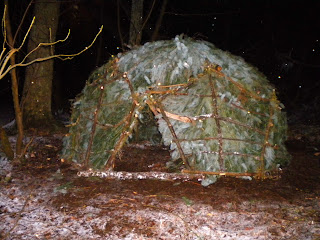 A fox danced through the woods like a drugged gypsy, darting in various directions as the snowfall became more concentrated. It didn’t stay for long and headed towards the recycling centre for supper, or indeed to recycle. We completed the 5 pentagon sandwiches and had them arranged upright by midnight. It was freezing cold so we could never stop for very long without our fingers becoming increasingly numb. 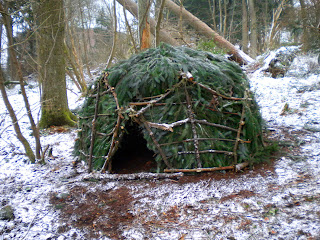 A couple of hours later we had arranged the roof and tiled it with the conifer branches from the adjacent deadwood tree. The hut looked surprisingly like a geodesic dome. I was surprised at how neat and structurally capable the form became. The rigid dome flexed and compressed to hold each of its components in place. The snowfall now seemed fairly heavy and I was sure that the hut would soon resemble an igloo rather than a finely panelised dome. 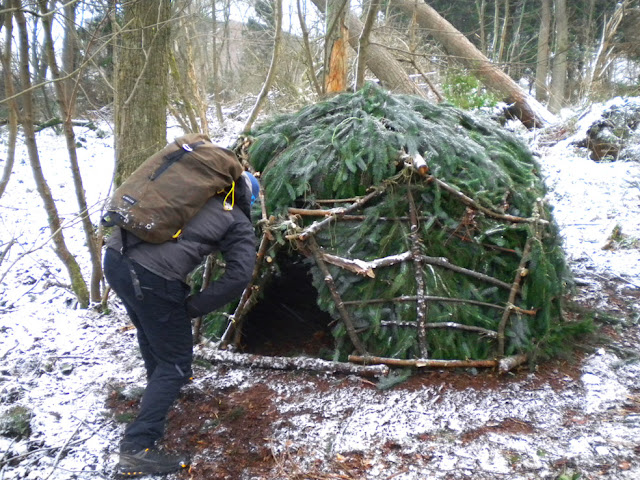 Roughing it:
We passed our gear through the small triangular door and rolled out our sleeping mats. Things weren’t much warmer in our sleeping bags as temperatures on the hill plummeted to around -7. Not ideal, although I learnt a good trick that by placing my hands deep into my pockets I was able to sleep without shivering. I wrapped a scarf around my face as tiny flakes of snow drifted through similarly tiny gaps in the structure. The hut became a great wind-break and we were more than pleased with this minor sheltering victory.

We chatted until late and fell asleep to the sounds of agitated trees moaning in the wind with old limbs creaking. A dog barking right outside the hut signalled morning and was a great natural alarm (reminiscent of clockwork, much like their toilet habits). We packed quickly as the morning air was much colder than the previous night, partnered by a fierce wind. 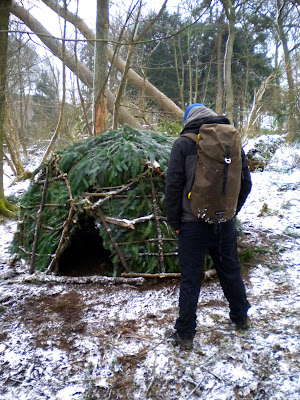 We skipped breakfast and made our way through the arterial maze of forest trails until we aligned once again with the main dump access road. The snow was still falling heavily and after a short commute I was back home and beginning to warm up slightly.

I decided to eat the croissant I had bought for our breakfast, but on further inspection the bag was chewed open and the croissant was hollowed out by that stealthy little mouse earlier. It’s lucky the rodent had retired as it may have well found itself on the menu after munching our breakfast!
Posted by Kev Langan at 10:36