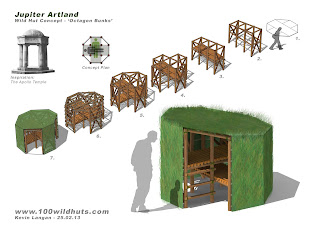 “This summer we are welcoming back internationally acclaimed artist Alec Finlay, who is working with the Bothy Project Architect to make a new bothy, Bothan Shuibhne, on a Scottish island. To celebrate this, Jupiter Artland and Alec have invited architect Kevin Langan to build a wild shelter, one of 100 he is making. Kevin's design is inspired by Ian Hamilton Finlay’s Temple of Apollo; the shelter will be constructed from fallen wood and natural materials. Please come and watch Kevin work and have a chat.” 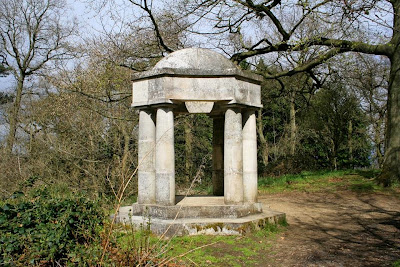 Earlier this year I received a call at work to collaborate with internationally acclaimed Scottish Artist Alec Finlay (son of the late Sculptor Ian Hamilton Finlay). I jumped at the chance to push the huts project in this new direction and after a few emails over many months found myself gathering wood late at night in the surreal landscape of Jupiter Artland near Edinburgh.

“Jupiter Artland: Works by many of today's leading artists, sculptors and land artists have been commissioned and then constructed in situ. The relationship of each artwork with its specific topographical location is a crucial feature of the artland, that is, art within the landscape. Jupiter Artland has charitable status and is committed to providing an educational resource for schools in the region.” 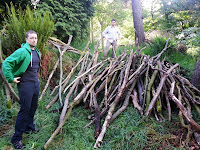 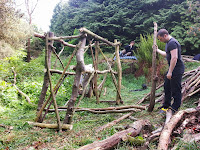 I was once again hut building with my good friends Arran Brown and Richard Paterson. We gathered wood until dark then slept out under a wooden canopy in the park’s education garden. I provided Arran with some welcome ear plugs as Richards snoring was like clockwork in both rhythm and predictability. Alec Finlay had selected a great site for the hut-build close to his father’s Temple of Apollo deep in the woods.

The hut design made reference to the temple’s structure and would be ironically situated in the Artland’s dumping ground. The wild huts project had always been a peripheral experiment in exploring forgotten spaces and so this nettle strewn corner, slightly off the trail seemed perfect. That night the park was alive with wildlife. Squirrels raced through the treetops and small roe deer stood frozen in the woods like statues (it wouldn't surprise me if they were actual sculptures). 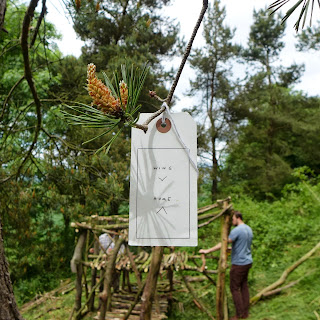 The Build:
By 10am the following morning we had gathered enough dead-wood for the build and decided to make a start on the structural frame (as the whole build would take a full day to complete). No sooner had we started arranging the first few wobbly timbers upright when the park opened its visitor gates and we attracted a crowd of intrigued onlookers. I was hoping to complete the frame fairly quickly as the build always looks fragile and embarrassingly unstable through the early stages. Over time - thousands of thin binds can form a more unified structure, but at the start it’s a bit like building a shed with shoe laces.

Alec arrived with his team who have been working towards building an artist resident bothy on the Isle of Eigg. The biting midges also arrived in force and so everyone painted themselves in liquid repellent as if war-paint, ready for the forthcoming invertebrate micro-battle.(‘Smidge’ insect repellent seemed to work ok for around 1.5 hours until most of it had ran off with my sweat). Alec lit a fire (with permission from the head gardener!) which really helped keep the midges to a minimum. 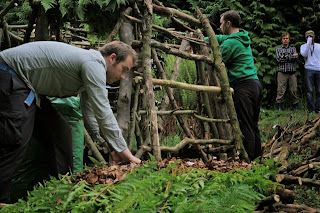 The first sleeping platform was cross-braced with a second platform below. Alec cleverly noted that the structure had transformed from a –minus sign into a +plus sign. That signified a lift in spirits and we progressed with the wall panels and roof. It was a very ambitious build and I knew we would be tight for time. 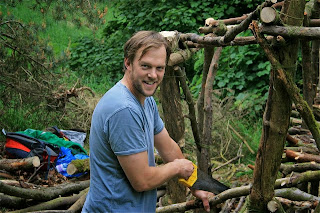 Bobby from ‘The Bothy Project’ lent a hand with the build as it progressed late into the afternoon. After the first sandwich panel was fitted in place the park was closed and it's woods descended into quiet once again. We joined Alec’s studio manager Luke for a quick pie at the local pub and returned to complete the build in darkness. We had a few panels still to construct (and I had a full day of work in Glasgow 40 miles away the following morning), so we were keen to complete the structure and get some sleep.

Roughing it:
By midnight, Luke had returned home to Edinburgh on the last bus (after bravely rescuing a baby lamb with its head stuck through a fence en-route), and we had completed the last of the wall panels. Arran agreed to sleep on the top bunk, Richard on the lower and myself on the soft ground below. It wasn’t until I wriggled into my sleeping bag that I realised the precariousness of the situation. 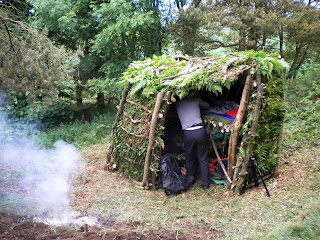 If anything collapsed (as it often did with rotten wood) I would be badly crushed below tones of broken timber and heavy bodies. I smiled at the impending risk, popped my ear plugs back in and drifted off to sleep in what was a warm and comfortable shelter. Without a single creak or crack through the night – we woke around 8am and headed back through the sculpture park for home. 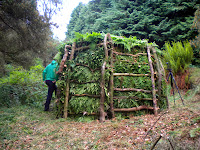 A nice chap Gavin came to video the hut build for Jupiter Artland and noticed a large badger that morning not far from the hut. It never fails to impress me that large wild mammals can still live freely so close to human habitation. I’m just glad it didn’t choose to investigate our particular hut dwelling that night as badger wrestling is not a strong part of my skill-set. 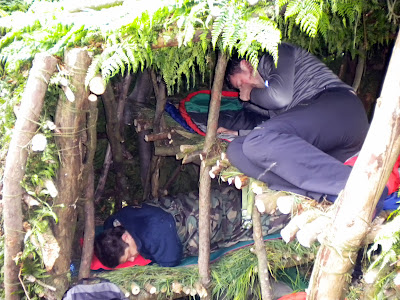 I arrived late that morning for work and sat at my desk slightly dazed and once again stinking of earth. I received some images of school groups who were writing about the hut structure and was led to believe that the Jupiter head gardener also slept in the hut with his kid that night. It is great to see the fruits of our labour being appreciated by kids rather than being just torn down by them! 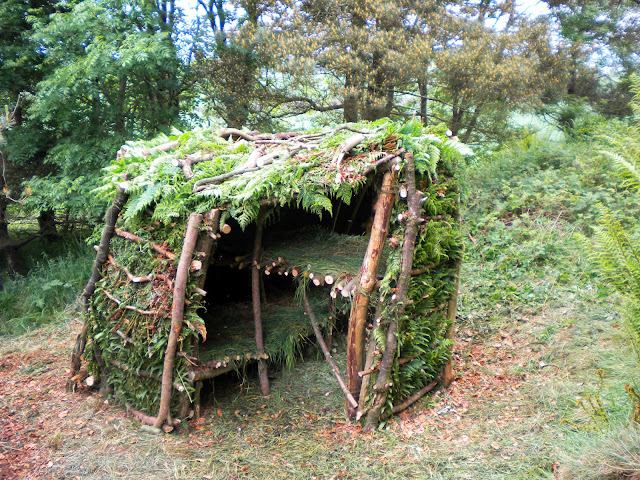 "on the font of the wood
IHF’s sun temple’s
dedicated to
that wild red youth,
Apollo-Saint-Just, incarnate
forging a revolution
from the whole
framed in the round
by the cupola
that highlights azure
in the changeless
ever-changing sky" 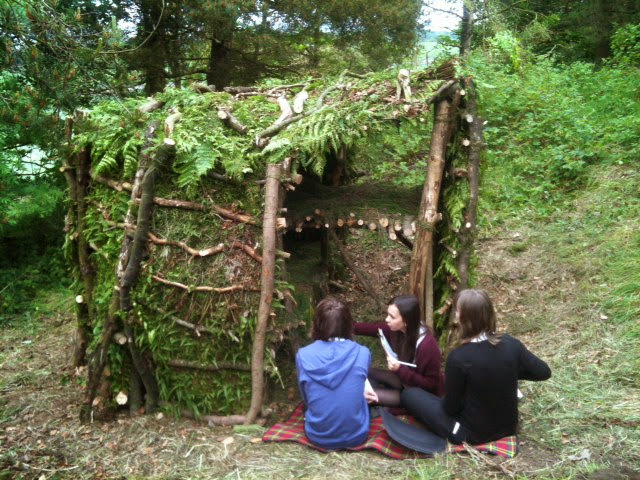 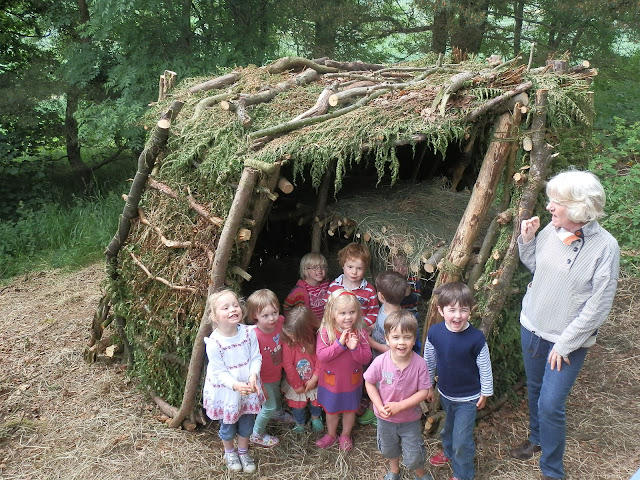 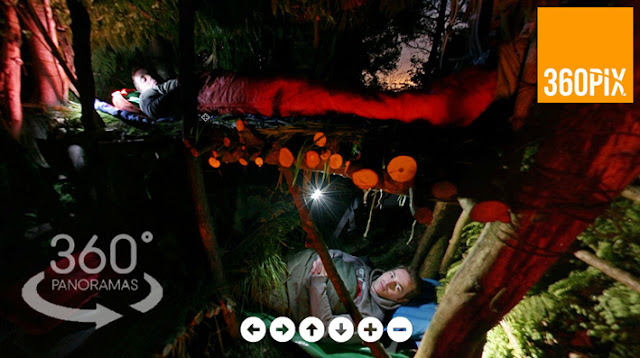