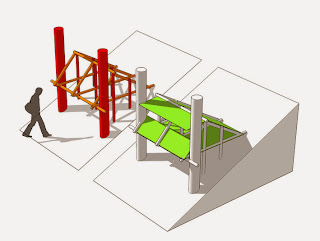 A good friend Gordon Anderson was keen to experience another wild hut building challenge. We parked the car at Chatelherault just outside Gordon’s home town of Hamilton and followed a woodland trail which shadowed the River Avon far below. These ancient woodlands were one of the great assets of the royal hunting estate of Cadzow, which came into the possession of the progenitors of the family in the early 14th century.

We passed some huge gnarled trees which looked like a herd of calcified elephants, and is thought to be the oldest living oak woodland in . Dendrochronology (scientific tree-ring analysis) has ascribed them to the 1460s (550 years old-ish). 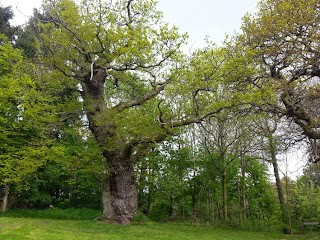 Soon after, we passed another interesting feature - a carved old log which read; “As soon as you take one thing by itself you find it hitched to everything else in the universe”. It was intriguing to find some John Muir paraphrasing deep in these ancient woods. Muir expanded on this point with another less elegant but more descriptive quote; "When we try to pick out anything by itself we find that it is bound fast by a thousand invisible cords that cannot be broken, to everything in the universe.” I’m fairly sure we humans will hang ourselves with these cords long before we understand their critical value. 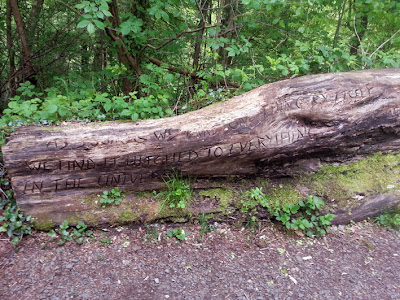 The Build:
We came to a sharp bend as the path steered away from some steep falling ground. As we left the path in search of a suitable build site, I noticed the cool forest had a thick carpet of wild garlic and tumbled trees. Gordon suggested that our hut concept echoed the form of an old ‘look-out hide’ which was perfectly fitting for this royal hunting estate location. This poetic observation helped to connect the project with the rich history of the woods.

As the area is predominantly characterised by a dramatic steep-sided gorge, I thought it would also be fitting to create a structure that dove-tailed with the topography. We decided to create a sleeping platform which could be suspended above this steep gorge by projecting out from the hillside. We scooped up a plentiful supply of fallen deadwood and bound the primary structure with biodegradable garden twine.

Gordon found working with the twine a minor struggle so I got to work on 4 large sandwich panels as he arranged the sleeping platform. The panels were heavy and difficult to place at high level. As I climbed on the structure in order to arrange a roofing panel I smashed through one half of the sleeping platform. After I patched it up Gordon suggested that at least he now knew which side he was sleeping on!

We had a deadline for 6:30pm as the Champions League football final was being played that evening and we had ambitions to watch it. We completed the last roofing panel together and hauled it onto the frame. Other than some patching-up, the build was complete by 6:45pm and we headed back along the twisting path for a mixed Kebab and a night of European football action. 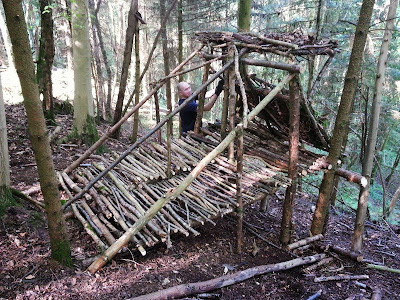 Roughing it:
At around 10pm we hopped back into the car with a football sized kebab wedged in our stomachs, remarking on how lucky it was that the hut was well ventilated.

We parked the car in a nearby housing estate and walked swiftly past groups of arguing youths. Our packs were laden with camping gear and we tried not to draw any unwanted attention to ourselves. We crossed the formal lawn at Chatelherault Estate and noticed a fox silently stalking some rabbits in the darkness.

Back at the hut-site we spent an extra hour building a small sandwich panel each which completed the roof covering. A large lemon-yellow moon shone through the dark woods as we climbed precariously onto the elevated platform and wriggled into our sleeping bags. The sound of the river rushing far below was often broken by the sound of distant cars screeching through the nearby country lanes. Similarly, Gordon’s snoring was often interrupted by the sound of screeching foxes in the fields beyond the forest edge. I’m not altogether sure which was better. 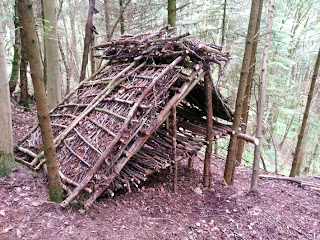 We woke to a typical Scottish breakfast of mince pie, washed down with some luminous orange Irn-Bru (which incidentally has a warning on the can suggesting it may cause ‘behavioural changes in children’?!) It was indeed the breakfast of champions. 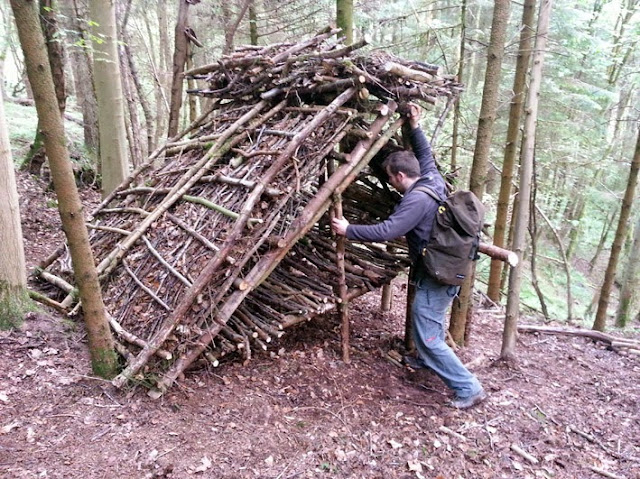 After a loud cracking noise I turned to see Gordon snapping through his bed slats. He pulled his arse back through the branches and re-distributed his weight more evenly.

It turns out it is very difficult to control your laughter when someone is dangling precariously in their sleeping bag over a steep embankment.