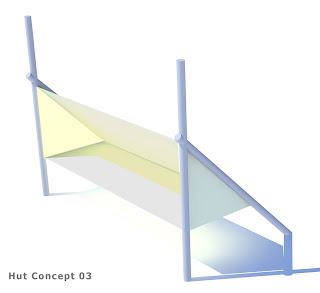 In 1988, almost 5 million people came to visit the National Garden Festival held at Glasgow’s Pacific Quay. I have blurry memories myself of being dragged around there by the school when I was about 6, wondering what on earth a ‘garden’ was...and why it merited a festival.

Other than the new media district, the vast majority of this area remains undeveloped today with much of it being fairly overgrown with birch and sporadic juniper. Although the majority of forests are in thin peripheral bands, you can follow evolved muddy trails through much of it.
Hut Construction:
At the parks south east corner, I followed converging paths until they terminated in a clearing on top of a small hill. I decided to make a simple lean-to construction with a sleeping platform as there seemed an abundance in strong timber that would support my increasing weight.
I foraged for an hour, gathering the largest branches I could find from wind-felled trees. I lashed these quickly together with some old twine, forming a sturdy bed platform and a single-pitch roof. I was surprised at how quickly this could be constructed. 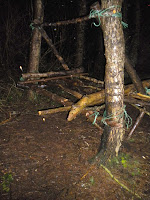 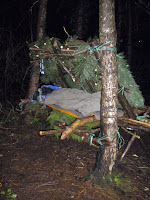 I decided to use the heavier gauge logs to sleep on, with the lighter branches forming a roof structure. I didn’t like the thought of sleeping under a ton of wet and heavy roof, so I used a light weight branch for the main ridge pole...(a rational but ultimately flawed decision that would come back to haunt me.) 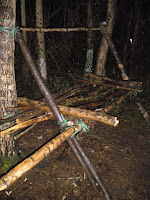 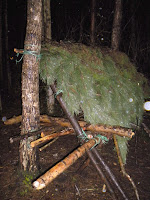 At the far end of the park a 20ft pine tree had been felled by the wind. I pruned it’s dead but ever-green branches which I hoped would make good roofing material. The needles were dense and looked like they would provide good rain cover and in the process left the skin on my hands perforated like a pin cushion. I brought the fur branches back to the hut and tiled the roof with these dense needles. I was fairly impressed at how quickly the hut construction took, around 3 hours in total. 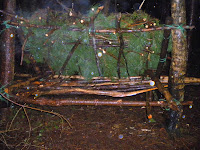 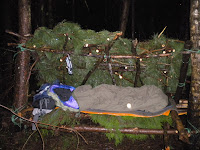 Roughing it:
The rain was relentless but luckily the equally relentless winds couldn’t penetrate the thick forest cover. I decided I would test the sleeping platform so lay down across the base-logs. Something instantly gave way and I found myself rolling around on the slippery structure like a lubricated turtle. Hmm...one of the support ‘sticks’ must have been partially rotten. I repaired the platform and used some fan-like juniper branches to spread my weight more evenly across the bed. It was all surprisingly comfy, but the rain was torrential and some drips were managing to penetrate the roof cover. 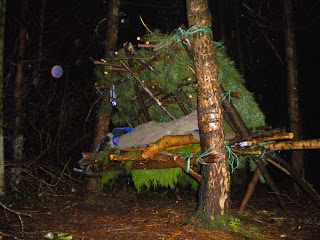 On the forest floor, not far from the structure, something quite unexpected began swirling around in a dazzling array of flashing lights. It is fair to say at this point that I momentarily decided to be scared. It was like a blurry amorphous ball of golden swirls and lights, hovering just off the ground. As I peered through the darkness and rain, I was relieved to see it was only a small dog with some futuristic flashing collar. It felt strange to be startled by something so ordinary in the forest. When you’re surrounded by dark woods, your senses are always on-edge, although dogs were the least of my worries. I was more concerned at how I would explain myself to passing police officers who might patrol the park, or a group of drunken youths. Luckily, the forest returned to quiet, other than the peaceful spatter of water on leaf-litter.
It was again around midnight when I decided to go to sleep. The roof kept out the majority of the storm except for any odd drip which managed to navigate through the dense fur covering. The bed of juniper was springy and comfortable and it suitably managed to spread my weight evenly across the platform. 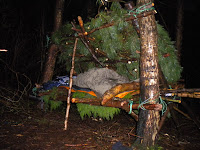 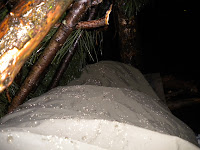 Well, (this is the embarrassing bit) at 3am I woke to find my legs trapped under a erm....fallen roof. I lay there for maybe 10 minutes, wondering if I should just go back to sleep. But I decided that learning from my mistakes and gathering useful experiences is what this is all about. I slid out from the rubble of branches and managed to find a suitable replacement for my snapped ridge pole. (I also introduced a central support...just in case.) The decision to use lightweight timber on the roof had back fired. In future, the structural elements should be of ‘structural quality’, especially if they are hovering above your sleeping head. 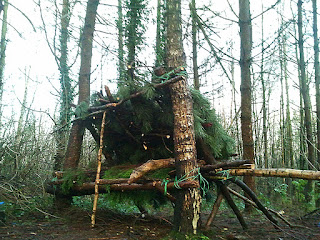 I woke to a frosty start and a still clear morning. It was another strange night in a strange place with the prospect of a full day’s work in the office ahead of me. The project seems difficult to justify on many levels but I always feel strangely refreshed after a night of ‘hutting’, so that’s enough justification for now. 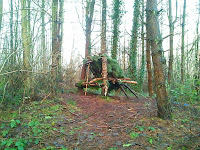 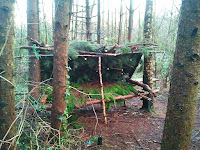