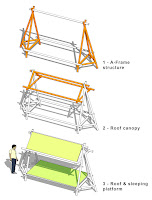 There is a children’s playpark close to my home, skirting ’s ‘media district’. I would often see groups of people abnormally disappear into a gap in the dense thicket behind the playpark. They seemed to be a mix of dog walkers and youths (who incidentally are about the only people nowadays who ever seem to stray from the prescribed pathways and pavements). One odd character trait I’ve noticed is that most of them bring carrier bags full of alcoholic beverages. I often wonder why alcoholics don’t just drink in the house rather than frequent these byways through urban wastelands. It would make the woods around a lot less sinister.
﻿ 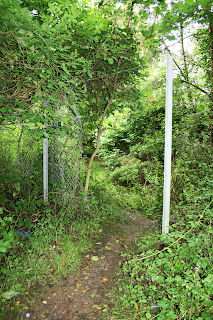 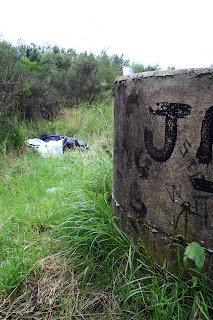 ﻿﻿I left home around 8pm in the rain - arrived at the playpark soon after and plunged into the bushes just beyond. I was instantly soaked through, and the ground was a dark sticky clay. After a few meters I arrived at a gap in the park’s wire fence where the path led through to a much more substantial forest beyond.

﻿﻿'Private’ wasteland like this (not maintained by the local authority) never appears to get cleaned up. The ground had a blanket covering of scattered beer cans, bottles and plastic bags. The path became more substantial and I soon noticed a huge concrete pipe projecting from the ground with what looks like a discarded tent just beside. There were plastic cups eerily laid out on the concrete - full of rain water as if people had just left. The place was fairly rancid by anyone’s standards. It was a Saturday night though and would be getting dark soon. I was fairly sure no one would be passing through here again tonight. I decided that the level grass just beyond the pipe would be suitable for a shelter and the forest which I had just passed through should have enough timber material scattered around.

The Build:
I already had in my mind the type of shelter I wanted to build. I took inspiration from the typical garden “swing-chair” available in most garden centres. They have an A-frame structure at each end with a swing seat and fabric canopy. It’s this basic idea I wished to translate into a 'shelter type'; two A-frame structures with a bed platform and roof canopy stretched between.
﻿
﻿

I searched the forest by head-torch for suitable structural timbers. It took around two hours of scrabbling through dark bushes, mud and tall grass to find enough timber for the structure. Groups of youths passed fairly frequently on-route to a wild night-out in town. They seemed to pass strangely close, just over a high wall which bound the forests eastern side. Searching for building material is a strange process. There were many occasions where I thought I simply wouldn’t find the branches required for such a build. It feels strangely rewarding to uncover a slimy, slug-covered log, buried deep in some bramble bush in the depths of night. It gives your life a whole new set of primitive priorities - if only for a short time. 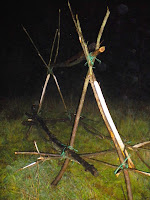 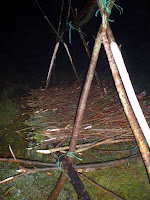 ﻿I lashed the A-frames together and strung the spanning branches between. The whole thing seemed really sturdy. The skin on my index finger had 3 stinging cuts from dragging logs through thorn bushes. The blood was all washed clean though by the incessant cold rain. I used all the smaller branches (which I had pruned from the structural timbers) to spread across as a sleeping platform. I decided that using lots of small braches rather a few large would make for a more comfortable sleep. Rather than a formal lashed “ladder” frame as a bed, I just lay as many branches as I could find to spread my weight equally across the frame. I lay down on the structure and it seemed ideal.

I built a basic canopy frame above with some lighter timbers and strung out a series of Broom bushes across as roofing tiles (I had learnt after a recent visit to the “Highland Folk Museum” that old Scottish dwellings from the 1700’s used broom bushes as part of their roof construction). They were quite irregular in shape so the roof took on a more free-form aesthetic. It took around 3 hours so gather enough bedding and roofing material so the structure was complete around 1am. The rain hadn’t really stopped all night and I was actually looking forward to a good sleep by this point. 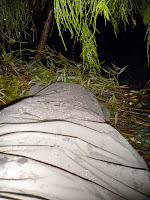 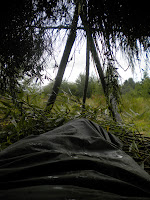 ﻿﻿﻿﻿ I really liked this structure type. It was free-standing (surprisingly), with a raised sleeping platform to keep me off the boggy ground. The roof structure utilised the A-frame uprights - everything seemed interconnected. (One could add a full-height wind-break to one side if the conditions were particularly breezy.) It ticked allot of boxes for me. I pulled my sleeping bag over and rolled into the hut quite gingerly, as not to put too much of my weight on one particular area. After a few creaks and small cracks (and myself writhing around like a eel…trying to get into my sleeping bag) I settled down for the night. The rain was particularly heavy and lots of drips found their way through the roof structure. It did a fairly good job though of keeping the majority of water off. I was pretty tired and the mattress of twigs was pretty comfy. I pulled my head under the sleeping bag to escape the biting midges. I feel asleep amidst the distant screams of party-goers who were heading home for the night.
﻿ ﻿ ﻿﻿﻿﻿I woke to a calm and bright morning around 8am. There were men sitting by the concrete pipe on strange metal drums which weren’t there the night before. All at once I felt extremely vulnerable. I slid out the sleeping bag quietly and stood up in the deep wet grass. I started taking some quick pictures when an older chap suddenly noticed me and stood up.
﻿﻿﻿﻿﻿﻿﻿﻿
﻿﻿﻿

﻿﻿﻿﻿﻿﻿﻿﻿﻿
They had a dog of some description which started barking but I couldn’t actually see it. I stuffed my sleeping bag into my rucksack quickly…twisted into my saturated trainers and followed another muddy trail which led to the nearby road. I looked back to see they had both stood up and were showing considerable interest in the structure…which looked like some mechanically rearranged wilderness. On the short walk home I started to wonder what they must have thought. Sleeping rough in makeshift shelters never gets any easier to justify, even to a group of confused alcoholics.﻿﻿ 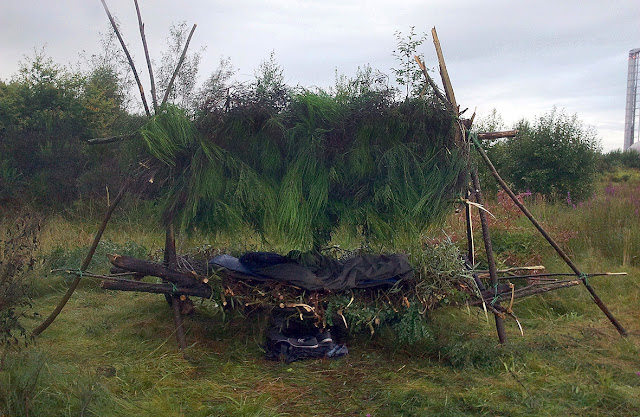