Location:
M8 Motorway, Glasgow
I was walking home from the subway when I noticed a gnarly pile of pruned branches in the corner of the park. On further inspection they were all broken branches from the winter storms which had never been cleared by the local authority. I looked around for a possible ‘hut’ opportunity but the thorny hedges which bound the park were far too dense to walk through. The trees looked slightly more substantial just to the west of the park although quite a distance from the wood stock-pile. I wandered over to the taller trees and followed a muddy trail through some rhododendron bushes. Only yards from the park I arrived at a fairly sinister looking place. There were computer monitors arranged like dining chairs with an upturned metal bin for a table. There was a thick, sheltering tree canopy above with plastic bags and beer cans scattered around like misplaced ornaments. It was the perfect alcoholic outdoor living space only yards from the park. 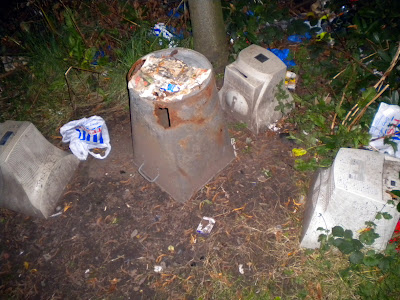 ﻿﻿Just beyond this was a narrow ‘shelter-belt’ of tall trees which separated the residential tenements from the noisy M8 motorway. I decided that this could be a suitable place to build a hut...although I would have to wait for the cover of darkness to transport the pile of branches which were a good distance away.
﻿
﻿
﻿﻿The build:

I waited until 8:30pm before leaving as the darkness seemed to be suitably cloaking. I walked into the park fairly nonchalantly and noticed it was comically busy for such a cold dark night. There was a chap in the middle of the park playing a saxophone and a series of dog-walkers all watching with interest. I walked past this spectacle gazing at my phone in order to look busy and disinterested. I had only just walked past when 2 police officers entered the parks western gate at a fairly slow thoughtful pace. The path curved round towards them and I was in no mood for explaining to them why I was carrying an axe and a sleeping bag whilst strolling in the park. I decided I needed a quick plan-B to avert their attention. In an effort to cause a ‘minor distraction’ I stopped and turned towards the saxophone player and started shaking my head disapprovingly. The police officers picked up their pace and headed straight for the substantial crowd which had now gathered. I used this opportunity to slip into the cover of rhododendron bushes.

﻿﻿I just gathered sticks in the narrow band of woods until the people dispersed and the streets fell quiet once again. I then made about 10 trips to-and-from the log pile in the park. I sorted the sticks into ‘structural’ and ‘non-structural’ (which translates as ‘wood which can support the weight of my fat bum’ and ‘wood which cannot’). I leant all the wood upright against a metal fence (in order to ‘de-slug’ them) when suddenly they all decided to slide sideways. A branch came down with some force and struck my forehead and neck. After the initial shock and pain, my first thought was...’how am I going to explain my bashed head at work tomorrow’?

I mopped some blood from my brow and made one final forage for timber over the fence to the park. I picked up the few remaining sticks when a late-night dog walker passed only a few feet away. I decided the best thing to do would be to drop the sticks and start looking at my phone in a desperate attempt not to look like a crazed ‘stick-collector’. I leant back against a tree and waited for quiet in the park once again. 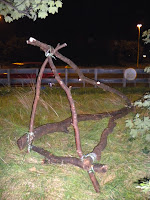 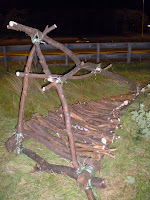 ﻿
The hut concept was fairly simple. I started with a long braced tripod shape - which I overlaid with shorter sticks to form a rigid sleeping platform. I then bound together clumps of road-side grass and arranged them on the timber frame like tiles, always starting from the bottom. The hut was complete by 1am and perched like an alien spacecraft at the edge of the motorway. 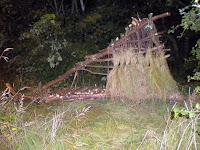 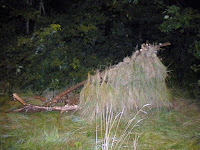 Roughing it:
I was standing upright - hopping around on the grass verge in an effort to wriggle into my sleeping bag when I noticed 2 highway service vehicles parked opposite with orange lights flashing. The back vehicle had a huge neon arrow alerting motorists to use another lane. It wasn’t at all obvious what they were actually servicing (line painting...road sweeping)?...but they were watching my attempts at a complicated ‘sleeping bag manoeuvre’ – whilst hopping around the embankment like a alien-slug beside it’s timber craft. When I finally lay down on the sleeping platform, the orange lights soon disappeared along the motorway.
﻿
﻿
﻿

Giant haulage vehicles and buses screeched past every few seconds only feet away as I lay surrounded by grass and twigs. I drifted to sleep until 7am when my phone alarms went off with annoying regularity. I gathered my things and slid through the shelter-belt of trees once again, joining the streams of commuters in the park heading for  work. This hut type was particularly robust and unassuming, I wish I could say the same for my bashed forehead! 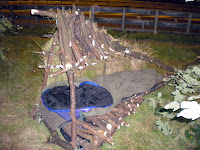 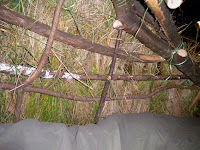 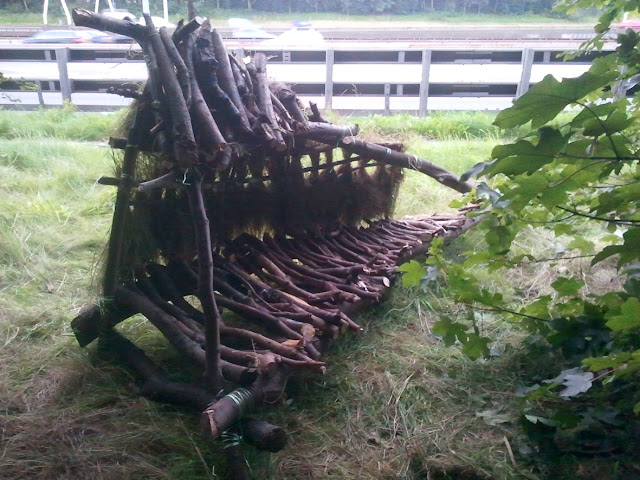