‘Experience gathering’ defines humankind’s behavioural and evolutionary makeup. Our perception is the process by which we ingest our experiences in unique ways and store them in the library-vaults of our minds. The sum total of these memories help to define who we are; ‘we are…what we experience!’…maybe.

I decided to take some city kids out into the woods for a spot of ‘experience gathering’…but mainly for grass and timber gathering! My daughter Katie is 6 years old and my girlfriend Kirsty’s niece and nephew (Jamie-Lee & Robert) are both 12. We decided to take them to a vast, deciduous woodland just north of to build a shelter big enough for 5 people. I grew up building dens in the woods and feel its something a lot of young kids are missing out on. The woods can be an inspirational and immersive place for a child and can supply real wholesome worthwhile experiences that are hard to shake. 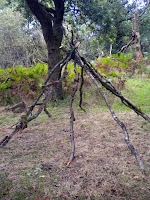 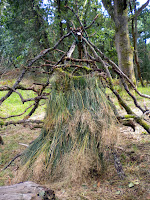 To keep it simple, we planned to build a traditional cone-shaped teepee. We picked up the kids around 10am and headed for Mugdock woods just beyond Milngavie. It was dry and sunny, although forecast for rain through the night. We backtracked along the trail until we found a delightful clearing with a ready supply of broken branches nearby. Kirsty armed the team with some scissors and knives and went off to collect bales of long grass for roofing tiles. 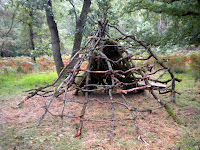 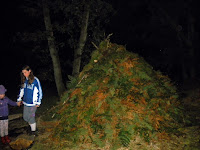 I was collecting wood when a lady suddenly appeared with some yappy dogs. ‘What’s going on here?’ she said in a stern authoritative voice which instantly annoyed me. I asked her why people can’t pick up fallen branches in the woods in today’s society without raising suspicion? I then proceeded to tell her that most of the mess around this area is from dog-poo. She apologised profusely and disappeared down the trail in a blur of furry yaps.

I managed to find around ten 2.5m long fallen branches which I whittled with the axe until tidy and straight. I arranged them in a circular cone-shape (3m diameter) and bound horizontal rails between each tilted upright (like a ring of triangular ladders). The rails would support the roofing tiles and stop them draping inwards (the more ladder-rails you have essentially means that water will run off rather than drain through. It also has a laminating effect and braces the whole structure rigidly). 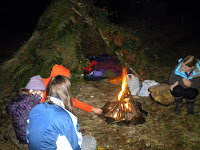 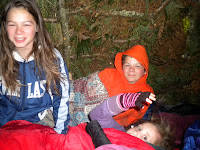 I quite fancied a shelter which had a hole in the roof for an internal fire chimney, but heavy rain was forecast so I decided the roof should be closed and the fire located outside near the entrance.
It took around 5 hours to gather all the timber and build the main structure. By this time we only had enough grass for around a 5th of the hut’s roof. We stopped for dinner and decided on a change of material. The team’s hands were cut to ribbons collecting the sharp grass and binding them into bales so we decided on softer bracken instead. This was a much quicker process and the whole roof was complete by 9pm.

Kirsty built a smoky fire which duly dispersed the biting midges and we all sat round to toast marshmallows on sticks. I rolled out the sleeping bags (5 deep) and by 10:30pm the kids were suitably knackered and snuggled up in the hut searching for dreamland. (Although we stayed mostly dry - a more substantial porch would have been a welcome addition to keep out driving rain during the night.) The roofing tiles shed the bulk of the rain exceptionally well and it just goes to show what can be achieved with a little time and allot of effort. 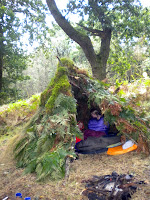 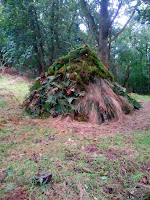 Around 7am, a group of walkers appeared outside the hut in matching red wellies (there must have been a sale on), extremely surprised to find that the hut was actually occupied! I slept through the whole event though so would have been completely useless had it been a dangerous situation (I had already checked the internet and most violent crime does happen between Thursday and Sunday, but very rarely in the morning…so I slept soundly!).

I’m not overly sure what the long term effect of hut building and sleeping rough in the forest would be for the kids. They suffer from an experiential-overload much of the time so I’m not sure if these ‘primitive experiences’ can compete with the likes of Harry Potter, the Nintendo-DS and the X-Factor (although you don’t have to pull blood-sucking ticks out your bum watching x-factor!).